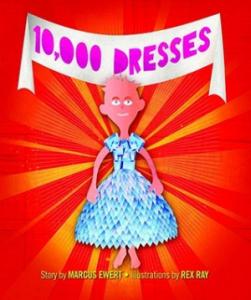 It's got a good message, but it's not as well executed as I would like. There's a girl named Bailey who dreams about dresses every night: "A long staircase led to a red Valentine castle. On each stair was a brand new dress, just waiting to be tried on! 10,000 dresses in all, and each one different!" The first one's made of crystals, and Bailey loves it. She wakes up and goes to find her mother and says, 'I dreamt about a dress. I was wondering if you'd buy me a dress like that.' Her mother says, "Bailey, you're a boy. Boys don't wear dresses." She says, "I don't feel like a boy." And her mother says, "Well, you are one, Bailey, and that's that! Now go away... and don't mention dresses again!" So Bailey's sad. The next night, she goes past the crystal dress, and sees one made of flowers that she also loves. She goes to her father the next day, who is in the garden pulling up weeds, and asks him if he could grow her a dress like that. He says she's a boy and boys don't wear dresses. She says she doesn't feel like a boy. He says the exact same thing as her mother: "Well, you are one, and that's that." So she's sad. That night, she goes to a dress made of windows: one that shows the Great Wall of China, and another the pyramids. The image adds things like the Arc de Triomphe, the Eiffel Tower, and the Leaning Tower of Pisa. She tells her brother about it, and he says, "You dream about DRESSES, Bailey? That's gross. You're a boy!" He threatens to kick her, so she runs down to the end of the block and sees an older girl named Laurel sitting there with needles and thread and old sheets. Bailey asks her what she's doing. She says she's making dresses, but it's hard because they all come out looking the same. Then Bailey talks to her about all her ideas. Laurel says, 'That window dress is an awesome idea, but how would we do that?' And Bailey says, 'We could use old mirrors.' And so they make two new dresses. Laurel says, "These dresses don't show us the Great Wall of China, or the pyramids." Bailey says, "But they do show us ourselves." Laurel thinks that Bailey's an awesome girl, and they make a great team because Laurel has the materials, and Bailey has the ideas.

This is another book where there's not enough there. I'd like to see more than just one person be accepting of Bailey. Bailey gets rejected by all the members of her family, who deny her gender identity. She's clearly transgender. She's then accepted by a stranger down the street who doesn't actually say anything about her looking like a boy or anything like that. It implies that Laurel just kind of assumes that Bailey is a girl. Is it because she likes dresses, and only girls can like dresses? Or did they have some sort of conversation about this while making the dresses? Does Bailey "look like a girl"? Does she carry herself "like a girl"? I don't know. There's no mention of that, which would be nice, because it's realistic. It would be great if one of Laurel's family members changed their minds, but I know that's not always realistic. But it would be great if more than just Laurel saw that Bailey was a girl and accepted her for who she is. Or, failing that, for Bailey to understand and be grateful for what she has discovered in Laurel: a friend who accepts her for who she is. I think that needs to be more obvious. It may be unfortunate that it needs to be more obvious, but I think that it's important that Laurel be explicitly recognized as somebody who is doing the right thing and not just kind of be assumed to be doing the right thing because she's at the end of the book.

Sometimes a person who has the body of a boy feels like she is a girl instead. Or, everyone should be accepted for who they are inside.