Alfie: The Turtle That Disappeared

I guess tortoises are turtles, too? 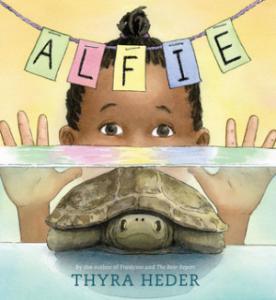 This is a strange book. A girl named Nia gets a turtle named Alfie for her sixth birthday, and talks to him every day, and then gets bored of him, until a year later when he disappears. Then the point of view shifts to Alfie's perspective, where he actually is responding to everything she says even though she can't see it. He's highly personified, even though the art is fairly realistic. It turns out that he leaves his tank to try to find her a birthday present for her seventh birthday. He goes outside, time passes, winter comes and he hibernates in the back yard of the townhouse Nia lives in, and dives to the bottom of the fish pond where he finds a turtle keychain. He surfaces to find Nia celebrating her eighth birthday party, and comes to her with the keychain riding on his shell.

It seems somewhat unrealistic for Alfie to survive the whole year on his own. Turtles do actually hibernate, but would a pet turtle know how to find food, especially in a backyard? It also seems strange that nobody finds Alfie in his travels from the apartment to the pond. I think maybe the message that the author is trying to get across (other than, "Turtles are cool") is that people/creatures appreciate everything you do for them even if they don't show it. But I don't feel like that's true with animals, especially relatively primitive ones like turtles. They might appreciate generic attention, but they're not going to be "laughing" at jokes, let alone thinking about how to repay kindness. Who knows why turtles escape. I doubt it's to find birthday presents, though. Maybe they don't actually like their living conditions. And in the half of the book narrated by Alfie, he doesn't seem to even notice when Nia becomes bored with him. It also seems unrealistic for him to somehow climb down the fire escape of the building. Even if he lands in a pile of leaves, I'm not sure he'd be uninjured. Also, if Alfie is actually a species of turtle which can hibernate underwater, it'd be nice for the author to have made that clearer, maybe even explaining the methodology behind it. For example, turtles can apparently breathe through their butts (look it up!). And I guess Alfie doesn't feel like coming out of hibernation for a while after spring has arrived, unlike the average hibernating animal.

If animals were not only self-aware, but capable of communicating with each other, wouldn't they be aware of the passage of time? Or, at the very least, the rising and setting of the sun? But, no, Alfie thinks that the party he arrives at, Nia's eighth birthday party, is the same day as he left, a year before. Maybe he's just really stupid.

It's not a bad book, just somewhat shaky in plot. The writing is okay. The art is pretty good. And Nia and her family are nonwhite, which is a plus for diversity. I'm just not that crazy about it.

Turtles love you back.