Not enough here to be useful. 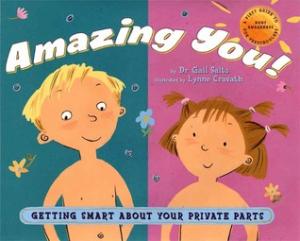 It's one of those picture books that tries to talk about bodies and sex, and just doesn't talk about the hard parts. Also, I'm fairly sure that they don't actually mean that your "head, arms, hands, legs, and feet" are used "every time you hug your mom, ride a bicycle, or eat a snack." I usually don't use my feet when I eat a snack. I imagine there are some people that do, like people don't have hands. At any rate, it describes private parts as "the parts that nobody else but you sees," which is not accurate, because your parents see those when you're younger, like if you're a preschooler, which is the age this is aimed at. Your parents are going to bathe you. Your doctor's going to look at you. But it doesn't mention anything about bad touching, about not letting anybody else touch you there, or look at you there, which would be helpful.

It's not inclusive of transgender people, but that's fairly typical for books aimed at children this young, especially ones which were written decades ago (2005 in this case) so it's dated because it doesn't explain or leave space for that. It basically says, if you're a girl, you have a vagina. It doesn't use the word "vulva", but it uses the word "vagina" correctly-- it says the vagina is covered by labia. It mentions the urethra, and talks about boys and their penises and scrotums. It says that it's okay if you touch yourself, but you should do it in private. It shows illustrations of boys growing into men, and girls growing into women. They're multicultural and have no armpit hair, and the man doesn't seem to have any pubic hair, either. Here's as close as it gets to discussing sex: "When a man and a woman love each other and decide that they want to have a baby, a man's sperm joins with a woman's egg. From the egg and sperm, a baby will grow." There's a lot missing from that sentence, and that's the hard part to talk about. The easy part to talk about is, 'These two things come together-- Tada!'

It mentions the umbilical cord, which is nice. It talks about babies being born vaginally but doesn't leave room for cesarean sections. I'm getting tired of that in books. It's nice that it mentions the vagina is stretchy.

It's not really helpful. It's just not useful to anybody having a complex discussion. I mean, yeah, preschoolers are going to understand it, but there's important things you need to be discussing with preschoolers in addition to this-- People not touching them inappropriately and similar ideas, because you need to really talk about that before it might happen. You want to head that off ahead of time. At any rate, it's not bad, but it's not great. There's not enough to it. It goes into a little bit more detail than the book "Who Has What?" by Robie H. Harris, but not too much. And that's not a very high bar.

Also, the illustrations are rather cartoony, which is annoying when talking about something this complex and important. They're not realistic enough for me.

Boys and girls have different bodies, and different parts of them are used in making babies somehow.

Should not be for kids at all

It shows pictures of penises and vaginas and that should not be aloud for kids because if a girl saw this book she would see a penis and most parents don’t want their daughter to know what a penis is and most parents also don’t want their sons seeing vaginas either! I would not recommend letting your kid read this. They also talk about sex and they shouldn’t. (Cause it’s for kids) and it says that it’s ok to be curious and touch yourself (and it is) but they shouldn’t mention it or encourage it because this is for kids! Kids are reading this! I do not even know why this is for toddlers and they never mention puberty or periods all their talking about is sex and showing little kids things they shouldn’t see yet! And it says it’s for ages 3-7 which it shouldn’t be. Don’t let your kids read this. PLEASE.

I think it's important for children to know about their bodies, and how they are different from other bodies. I have two young sons, both currently within the age range for this book, and they have seen me naked, as I have seen them naked. Just as there is (and should be) nothing sexual about me seeing my young sons naked, there is nothing sexual about them seeing me naked. I don't do it on a regular basis, but I figured it was only fair. They also both know where babies come from, and that daddy put his penis in my vagina to accomplish that. And we've explained that it's something that children aren't ready for, because it's nothing to be ashamed of. Above all, it's important to me that my children not be ashamed of their bodies, or think that others should be ashamed of their bodies, or think that sex is in any way shameful. It's an important act that can have major consequences, so it's not to be taken lightly, but hiding it only makes the problem worse.

dude its a kids book about private parts whaddya expect