Somewhere on the good side of "meh." 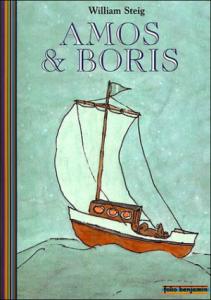 This is an odd story, but I suppose that's to be expected from the author of "The Amazing Bone" and "Sylvester's Magic Pebble." A mouse named Amos, who lives by the sea, decides to build a boat and go sailing in the ocean. It's unclear where he learns how to build a boat or sail, although he does seem (from the perspective of a layman such as myself) to take important things with him, such as "wood in case repairs should be necessary" and "a needle and thread for the mending of torn sails." Oddly, he doesn't seem to take any tools for fishing, though you would expect that to be a major source of food on the ocean. Maybe, since he's a mouse, he doesn't expect there to be many fish of the size he can eat. At any rate, he is some kind of natural-born boat-builder and sailor, and instead of practicing sailing near the shore for a while, he just immediately heads off into the middle of the ocean, where he gets so wrapped up in navel-gazing that he falls off the boat and into the ocean, never to see the boat again.

Luckily, this happens in the middle of a whale pod, and a whale named Boris comes by the next day and marvels at the unique animal in the middle of the ocean. Upon receiving Amos's explanation of his origins, Boris agrees to carry him home, fascinated to get to know such an unusual creature. It takes them a week to get home, during which Amos learns to eat plankton somehow (maybe since he's a mouse, they're big enough for him to see? But how would he get enough of them to eat?) and apparently only misses "fresh, unsalty water" instead of simply dying of thirst. They get to know each other, and Amos, upon reaching his home shore, promises Boris that if he can ever help him with anything, that he will. They part as friends.

Years later, Boris is a victim of a Hurricane and, in an unbelievable coincidence, ends up stranded on the exact beach where Amos lives. Amos promptly brings by "two goodhearted elephants" who roll Boris back into the ocean. And then they say goodbye again. The end.

There's definitely a parallel between this story and the fable of "The Lion and the Mouse" or "Androcles and the Lion", depending on the version you read, except that the whale apparently is a baleen whale (given the reference to plankton) and never actually endangers Amos's life. The larger animal saves the smaller one, and when the smaller one promises to repay the favor someday, the larger one scoffs. In this case, however, it's more of a good-natured scoffing. Amos doesn't need to promise to help Boris in the future in order to prevent Boris from eating him; he just does, out of the kindness of his heart. Both creatures are very kind-hearted, and their brief acquaintance but lasting friendship shows that they understand this in each other.

I'm not really sure what this book is trying to say. It's well-written, but as with the other Steig books I've read, most of what happens doesn't make much sense. How does Amos know how to build, and sail, a boat? Why doesn't he practice first? Why does Steig find it necessary to tell us all of the things that Amos brought with him on the boat if none of them ever get used, and the boat is never seen again? Why the scene, just after Boris rescues Amos, of Boris "[forgetting] for a moment that he had a passenger on his back and [sounding]" (i.e. diving), followed by his resurfacing, throwing Amos into the air to painfully hit the water again, at which point Amos, "Crazy with rage, ... scream[s] and punche[s] at Boris until he remember[s] he owe[s] his life to the whale." Why doesn't Boris just think to warn Amos ahead of time from the start? How does Amos avoid dying of thirst in his week without fresh water? Also, I take issue with Amos's phrase, "I'm a mouse, which is a mammal, the highest form of life." That's not how evolution works. And although it's a cute usage of language to describe Amos's life as "mousing around", describing Boris as "whaling about" makes it sound like he's killing other whales. That's a word, and it has a meaning. He can't just expect us to forget the meaning it has. Although, technically, "mousing" also means killing mice.

Also, the phrase "I don't have to tell you how these old friends felt at meeting again in this desperate situation." Okay, technically, Mr. Steig, you don't. But you also didn't have to write this book. You're a writer, for Pete's sake. Write.

How come we don't get any explanation of where Amos manages to find elephants? Does Amos live in Africa, and they just happened to be passing by? Is there a nearby zoo that he broke them out of? Is Amos's world just populated by various animals and they're his neighbors? And after the elephants help Amos, does he now owe them a favor as well?

Maybe I'm just nitpicking. The book has a good message, decent artwork, and it's well-written. But for me to give a book the best rating, I want to come away going, "Yes! This is what I want people to read to my kids!" And I just didn't get that from this book. Sure, it's a decent book, but that just puts it in the company of the vast majority of books that range from mediocre to okay to decent. It's acceptable, but I'm not wowed by it. I'd give it like a 7/10, which in my rating system of bad-meh-good puts it as a "meh".

Be kind and help others.