Not to be confused with Challah bread. 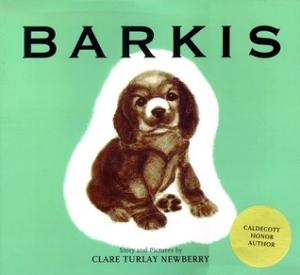 It's interesting to see the evolution of picture books. This was clearly aimed at young children, with characters of 9 and 10 and a half years old. There are large, somewhat dated images. There's not a lot of color, with everything brown and gray. There's no background, just floating animals and dishes and things. The illustrations are definitely cute. I would guess that they are paintings of some kind, or possibly pastels.

The massive amount of text is rather overwhelming, though. In a spread, the right side might be a puppy, and nothing else. A fairly good picture of a puppy, a spaniel of some kind. Not photorealistic or anything, but definitely identifiable as a puppy. Cute. And the left side is just this wall of text. Given that it was published in 1938, we've come a long way as far as children's literature is concerned.

The text is very well-written, especially compared to other books of the time. While there's a lot of text, it has a lot of personality to it. The characters have a lot of emotions. They're "begging", saying things "fiercely", "jeering", getting in arguments with each other.

Basically, the story is as follows. A little boy, for his 9th birthday, gets a puppy named Barkis from his uncle. His sister, a year and a half older, has a kitten. Since everybody loves puppies, she wants to share the puppy with him. He goes, "No, you never share your kitten with me." Later she suggests that maybe the puppy could be half his and half hers, and the kitten could be half hers and half his, and he rejects that entirely. Then the next day, the boy is looking for a ball to play with upstairs, and the puppy and his sister are downstairs, and his sister watches the puppy open the front door and go out by himself. She considers helping him, but decides that he's not her puppy, so he's not her responsibility. The puppy falls in the creek and she runs out and rescues him, feeling guilty the whole time. The family is worried about the dog because he's so young and so cold, and it's not good for tiny puppies to be that cold, and they decide to share the puppy even though the girl thinks the whole thing is her fault.

Take care of animals when they're young because the world is a dangerous place.