Bear came along. And then he went. 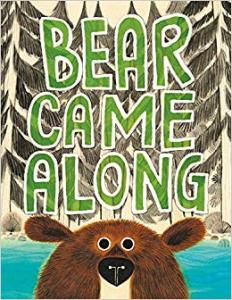 It's kind of an odd book. It's almost got a "The House That Jack Built" kind of thing going on, though with the repetition in the structure and not the words themselves.

There's a river. Then a bear comes. But the bear does X, until... The bear falls into the river on a log, and a frog joins him riding the log downstream. Various other animals join them: turtles, a beaver, some raccoons. They run into a duck who also joins them. And then they fall off a waterfall, and... they think it's really fun, I guess?

Some of the 2-page spreads are arranged in 2 rows, where you read the top of the left page, then the top of the right page, then the bottom of the left page, and then the bottom of the right page, which took me a while to notice and I found rather confusing. There's another spread where you have to turn the book sideways entirely to read it, which is an interesting yet annoying gimmick.

The message of the book seems to be, "Take a chance and see what happens"? It's another one of those many books where a bunch of creatures in a forest all seem to be able to talk to each other without any predator/prey relationship. Why did he choose these animals? Is it because the bear is big? Is there something inherent about bears that I'm missing? Am I supposed to draw on cultural knowledge about animals and their roles in fables, or is it just a random decision based on the size of the animal and their likely proximity to water? It's hard for me to understand how much of this is metaphorical, if any. Do I apply any of it to my life as a message? Or is it just random, unconnected events?

I know, people tell me in the comments all the time that I read too much into children's books. But I'm not sure where this one is coming from. The author's note afterwards seems to imply that it's about taking a chance and seeing what happens, and being bold, but that that's not really what's happening in the book. The book is just a series of accidents. And in real life, of course, falling off of a waterfall could do quite a bit of damage, especially to the smaller animals, and potentially injure if not kill them.

Take a chance and see what happens?