A Cache of Jewels and Other Collective Nouns

A boring of lists. 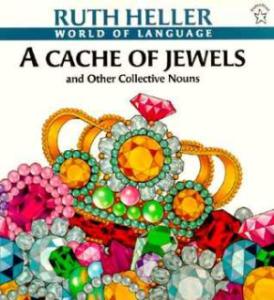 This book is an unordered list of collective nouns. Like a "gam" of whales. I thought whales lived in "pods." And I thought grapes were in "bunches" and not "clusters." "A kindle of kittens..." where she getting these words from? A "drift" of swans. Well, a string of beads are literally on a string. If you just had a pile of beads, they wouldn't be called a string of beads. Also, just having multiple trees does not make them a forest, and a bunch of puppies together is not called a litter. That's not what the word "litter" means. Although she does mention a "pod" of whales at the end, among other words to describe whales: a "mob," a "school," and a "run."

This is the kind of thing I was expecting "An Ambush of Tigers" to be like, but I was surprised I liked that book. I do not care for this book. The images in it are just average children's picture book images. They don't show the kind of detail that Heller uses when she's depicting flowers, for example, and of course the issues I have of the more specific group names being applied without any qualifiers. A litter is a group of puppies that all have the same mother. That's very specific. A pride of lions is also very specific. If you have five random lions they don't necessarily form a pride. And she doesn't point out that kind of thing, which is an important distinction in a book that purports to teach these words as if they are anything important. She's not literally saying that any group of ships, for example, is a fleet, but she has a responsibility to be accurate.

The page for "A bevy of beauties" is kind of sexist: it depicts a bunch of women and girls from the rear (multicultural, though!) wearing leotards and tights like they're in a ballet class. I'm pretty sure I've heard the word bevy used for quail or something. I've never heard it used for people. And course the lovely "host of angels." I mean, that's what it's called, but children aren't going to necessarily encounter that in the wild, like they would animals and plants.

Collective nouns exist, and here are some of them I know arranged at random.