Chickens Aren't the Only Ones

The wonderful world of eggs. 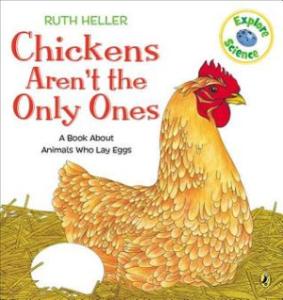 The biggest issue that I have with this book is the first few sentences that spread across the first three pages. "CHICKENS laid the eggs you buy, the eggs you boil or fry or dye! or leave alone so you can see what grew inside naturally." No, that's not how you hatch a chicken. You can't hatch a chick from an egg that you buy at the grocery store. There may be stores which sell fertilized eggs, but the eggs at the grocery store are not fertilized, and they are chilled so they certainly won't hatch. If they were fertilized, and you left them with the chicken, they would hatch naturally, and grow a chicken. I don't know why that part is there.

I actually learned some stuff from this book. I wouldn't have assumed necessarily that every single bird lays eggs, but they do. "Dinosaurs who are extinct, but they were reptiles too." That's a case of TV Tropes' "Science Marches On"-- we now know dinosaurs were more like birds. And there actually is one kind of amphibian that has claws (the African clawed frog, according to Wikipedia), but that's not a big deal (although it would have been a neat thing to mention). No other amphibian has claws, and that's a good rule of thumb to tell amphibians from reptiles. I've never heard spiny echidnas called "spiny anteaters," but apparently that's another name for them (one of the famous two egg-laying mammals, the other being the platypus). She also says the ostrich lays the largest egg, and then mentions dinosaurs. I'm going to guess that at least some dinosaurs had eggs larger than ostrich eggs.

But if she's going to bite the bullet and talk about reproduction and having babies, she might as well mention that what we think of as "eggs" are actually shells that contain an egg. Not all eggs have shells, and other animals that don't lay eggs still make eggs internally. She mentions on the last page that "animals who don't lay eggs have babies born alive and well." So, basically, animals that don't lay eggs don't lay eggs. Of course, not all animals bear their young; some starfish, for example, can shed an arm which will grow into a new starfish. And not to be a downer, but not all animal babies are born "alive and well."