Blurring the line between fantasy and reality since 1944. 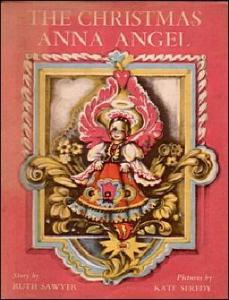 The printing on the cover is a bit offset and makes the girl look really creepy.

It's a weird book. It takes place in Russia, during a war of some kind. Oh, wait, it takes place in Hungary. My bad. It seems like Russia, but says "Hungary" in the topics of the book. It was written in 1944, so it's not World War II. I don't know what war it is. It doesn't say.

It's a Christmas story, as you could probably tell from the title. Basically, there's a little girl who wants Christmas cake for Christmas, which is apparently something regional to them. Because of the war, the soldiers confiscate all the flour, and the eggs, and everything, really. She's a peasant. And the peasants are fricking hungry. They're miserable, but they can't have Christmas cakes, because the soldiers took all their food. But maybe they didn't? It's kind of implied that the parents hid some somewhere. Anna, the little girl, has a vision? perhaps a dream? that an angel comes and makes Christmas cakes with her, and then the next morning is Christmas morning and there are all the Christmas cakes exactly as the angel and she had made together.

It's very weird. I'm not really sure what the point of the book is. It might just be trying to tell about the Christmas traditions in Hungary. They're very strange, but because I'm so unfamiliar with them I can't tell if they're weird and magical, or whether it's something that literally happens, or happened. Like Saint Nicholas comes to everybody's house. Is that a thing? Does that happen? And then the Bethlehem comes and visits them, with the Christ Child. And then they have a feast at midnight. I don't understand this. I don't know if it's supposed to be people dressed up as the Christ Child and Joseph, or if it's actual magic. It's really unclear because it's kind of written from Anna's point of view.

It is kind of implied that Saint Nicholas is actually their neighbor, who their brother stole plums from, because it says that he looks like him for a moment, but I-- wow. This is definitely complicated. And it's dedicated to a person named Anna. It could be real. It could be a nonfiction story as far as I know. It's just really confusing, really wordy, really long. The art is kind of pretty, but very dated. It's kind of like a sketch, but really colorful, and in some places the color is offset from the lines, especially on the cover. It makes the face of the angel look really freaky, but it's just because the red color is in the wrong place.

I don't know. I really don't know what the message is. I don't think it has a message. I'm really lost by this book. It's very confusing.