I can't accuse her of trying too hard. 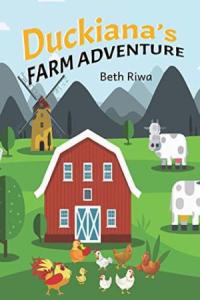 What did I just read? This is like the story of The Ugly Duckling, except instead of the main character being a swan among ducks, it's a duck among chickens. Duckiana's mother is just really incompetent, because her child is born with gunk on her eyes so she can't see anything. I thought maybe it was going to be a story about a blind duckling, but, no, she's just got stuff on her eyes. And the mother duck is like oblivious, and all the ducks leave, except that Duckiana can't see, so she can't follow them and gets lost. Then it rains and the stuff washes off her eyes, and she can see. She gets lost and ends up at a farm. The animals assume she must be a chicken, so she stays with the chickens for an indeterminate length of time. Apparently the farmer is also oblivious and doesn't realize that she's not a chick. Ducks and chicks do not look alike. She keeps trying to do duck things, and the chickens make fun of her. After a while, some ducks fly by, too far to hear her greeting, but nearby birds in the trees notice her and explain what she is, tell her she can fly, and take her to her family. So it's kind of like The Ugly Duckling, except that the duck finds her way home before she turns into an adult, and she doesn't get horrendously abused.

The art... is terrible. It looks like she took a bunch of clipart from various sources, in different styles, and tried to mix it together into a picture that made sense. There's so much copying and pasting, even in the same image. On page 26, Duckiana is reunited with her mother, and there are seven copies of the same cartoon duckling, including Duckiana, only slightly different in scale, and four copies of a different one. The style of illustration on the mother duck jumps around inconsistently. There's no listed illustrator, so I'm guessing the author made her own illustrations. Most of page 4 is done in a watercolor style, except that the mother duck is partially vector art, like they needed to change her coloration. Also, there is an additional hatching egg added next to the watercolor-style ones, except it's a badly-cut-out vector graphic, with the eyes colored brown (is that supposed to represent the gunk in Duckiana's eyes?). It's like she just didn't care. Everything's just slapdash and out of place.

The text is mediocre. The mother duck is just named "mother wood duck", like that, without any capitalization except at the beginning of a sentence. Duckiana is the only other character with a name. The illustrations don't closely match the text. The image on page 16 (almost identical to the one on page 17) has some kind of angry woman with a rolling pin, not mentioned anywhere in the text. The text on page 7 is logistically confusing, but there's no help at all from the illustrations. I'm gonna guess that the author speaks English as a first language, because there's nothing bizarre and ungrammatical about the text, but that's kind of a low bar for something published for other people to read.

Wood ducks are different from chickens.