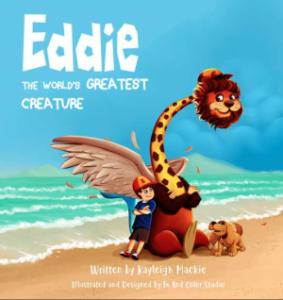 There's a little boy and a dog, and apparently the dog can talk, because the first line appears to be the dog talking to the little boy, and the the second line is the boy responding. There's no quotation marks, so it's a little bit confusing. Most of this book is told through narration by the boy, whose name is Eddie. He talks about what kind of animal he would be if he could choose, but he's made up his own chimera animal out of pieces of different other animals. He's got kangaroo legs to jump, wings from an eagle so he can fly, a really long neck like a giraffe (so he's really tall), a lion head, a dolphin tail so he can swim, and monkey arms. After describing it, he transforms into the bizarre creature that he's created.

He then takes off and flies, but he's got a really heavy body so he starts falling. He catches himself in a tree with his monkey arms, but then he hits his long neck on a branch. He lands on his feet and then jumps and bounces down a beach, but then he trips over his wings and falls into the ocean. He uses his tail to swim very fast, but then realizes he can't breathe so he comes out of the water. Finally, he decides he'd rather be himself.

I like the idea of being imaginative and then discussing what the problems are with your ideas. That's part of the brainstorming process-- first you come up with ideas without judging them, and then you go through the pros and cons later. But it seems like a lot of the stuff could be fixed, like he could iterate on this process, and that would be a better story. And I'm not sure how he gets up in the air to fly to begin with, because he immediately starts falling. But he's high enough before realizing that he can't fly that he lands high in the trees.

Maybe he could just dial back some of the things. Maybe his neck shouldn't be quite as long so he wouldn't whack it into things. Maybe if he held his wings in the right position, he wouldn't trip over them. Then, when he's underwater he's upset because although he has a dolphin tail he can't breathe underwater-- but dolphins can't breathe underwater either. All he needs is better lungs. It feels like he gets discouraged too easily. He came up with his own kind of creature, and when it doesn't immediately work the way he expected, he just gives up. A creature that was born that way would learn how to walk without tripping over its wings, and how to swing from branches without smacking its neck on things. Maybe it could use its wings to glide. It would learn how often to come up for air when swimming. There's nothing inherently wrong with his idea, and the book doesn't point out anything that the creature can't do that Eddie himself can. So why would he pick himself over the creature? It's not really explained. Eddie the human can't breathe underwater, or fly successfully.

The illustrations are pretty good. I really like the way the creature is rendered, and its actions and emotions. The text comes across as rather preachy and moralistic, as if it's saying "Here, I'm going to tell you why it's best to be yourself" and then goes off on a side story that makes no sense. "See, you don't want to be the thing that makes absolutely no sense, so you should be yourself." If you have the option to be any animal, including one that you made up, it's not a black-and-white situation. You could be a human with a dolphin tail, for example. And the writing is all in rhyme, but the rhymes sometimes go across different spreads, which is confusing. They're all couplets, and the first line will be on one page and the second line will be after a page turn. It really breaks the rhythm. And the meter is completely wrong. "Uh oh! I'm stumbling and tumbling, right into the sea!" Turn the page. "Oh, good... with my large dolphin tail, I can swim with great glee." Nobody talks like that.

It's a decent book. It's got an interesting idea, but the execution of the story could use a little work. It feels like it should offer some more reasons that he would want to be himself instead of this weird other animal. And it's unclear whether he's saying that he himself is the best animal, or that humans are the best animal. It seems like the message of the book is supposed to be, "Being yourself is the best thing to do," but usually "be yourself" means don't take on a different personality. And if this is a magical world where dogs can talk, what are his actual options? And is this an "imagine spot", or does he actually literally turn into the creature and try out its body? (I feel like I should change the name of my site to something like "Cassandra reads too much into children's books.")

It's a fun book. It's got its flaws, but it's not a bad book. It's cute. It's got a really imaginative creature, the art works really well with the story, and it's pleasant to look at.

Be yourself. Or, humans are the best animal.