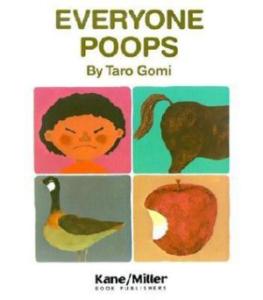 It's just a list of different animals, talking about the fact that they all poop. Birds, fish, elephants, how it's all different for each one, and then a little bit about people, and that's it. There are very few words in this book. All the pictures of people are rather abstract. There's a couple of naked penises, although abstract.

There's just nothing to it. The title is basically self-explanatory. Like, yes, everything that eats does indeed poop. The end. You don't need a whole book to describe this. Granted, it's not a very long book, but the whole book is just about poop. You could make a book titled "Everyone Eats," and it could just be all about eating, and it would also be pretty boring. Yes, some people think pooping is funny. I don't particularly think so, but I'm not gonna tell people that they can't. But if you don't think the mere existence of pooping is hilarious (that is, if you're not 5 years old, which I guess is the intended target) this book is boring. I would imagine if you thought it was funny, it would be a funny book.

I am attempting to not encourage that sort of humor in my children. I'm not trying to discourage it, but I'm also trying to make sure that they're not ashamed of the fact that they poop. I guess if a child had a shameful association with defecation, maybe this would be a useful book to them. It's very factual.