Maybe she should learn to crochet or something. 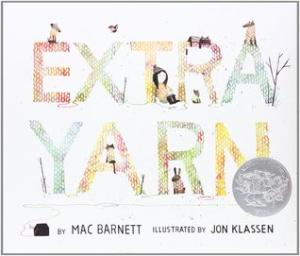 Not super sure what the message of this book is. It's kind of like a fairy tale. Basically, a girl named Annabelle finds a box in the snow filled with yarn of every color. She knits a sweater for herself. She knits a sweater for her dog. And then she just starts knitting sweaters for everybody in the town and realizes she's not running out of yarn. I love the guy who doesn't want a sweater, so she makes him a hat. Then she goes a little nutty and starts making sweaters for "things that don't need sweaters" like random inanimate objects.

An archduke "who was very fond of clothes" comes and demands to see her. He offers to buy the box from her for a million dollars. It says (another great line), "'No thank you,' said Annabelle, who was knitting a sweater for a pickup truck." The archduke offers her up to ten million dollars. She won't sell the yarn, so he hires some robbers to break into her house and steal it. He gets home, takes out the box, takes the lid off, and it's totally empty. He curses her and throws the box out the window and it floats across the ocean back to Annabelle, who apparently continues making sweaters for cats and trees and things. The end.

She's not doing anything useful, so it's not like there's that kind of message. And the first thing she makes is a sweater for herself, so it's not a "Be generous" message. Is it just a surreal book? It's got a fairy tale kind of "Don't steal things message at the end," but usually it's the protagonist that learns that kind of lesson. Magic not working if you steal it is a pretty common fairy tale trope, but he did try to buy it from her beforehand. Maybe he should have asked her to make him a sweater? She probably would have enjoyed that.

One weird thing about the art is that in many cases all of the things made with the yarn are shown to still be connected. It will show all these people wearing sweaters standing next to each other, and the sweaters are all still connected by the yarn, which looks really strange.

It's pretty. It's fairly innocuous. It's just a weird book. It doesn't go anywhere. There's no reason for her to be making these things. There's no impetus for it, and the only conflict resolves itself. I guess the message is, "Don't steal things." I don't think most people nowadays need to be taught that.