Rather too large to be a dainty dish. 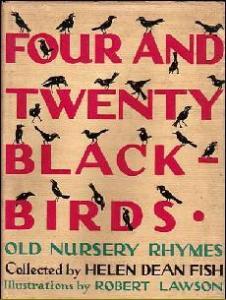 It's 104 pages long. It's actually got a musical score in the back of it. There's a bunch of rhymes and songs I've never even heard in here. I've heard "The Old Gray Goose", and "The Hungry Fox" looks familiar. I think I've also heard "Frog Went A-courting", but not that many verses. There's a rhyming version of "The Little Red Hen", which I've never seen before. I wonder if "Bumblebug and Bumblebee" is related to "Tweedledum and Tweedledee".

The author says in a note at the beginning that she's trying to preserve old rhymes that most people don't know, although she does intentionally include some that other people have heard like "The Old Gray Goose". And apparently "The Keys of Heaven" used to be more well-known as well. Someone like my mother-in-law, who's really into ETM (Education Through Music, which uses a lot of folk songs) would probably like this book. Most kids today would be unfamiliar with the wording for things, like "Come hither" and "Whilst they partook this dainty meal."

It's kind of interesting from a historical standpoint, but I'm really unsure whether this was ever intended for children.

It's important to remember all nursery rhymes.