Frog and Toad are Friends

Not as good as "Toot and Puddle." 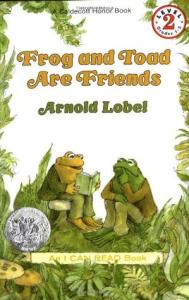 This is really a chapter book, when I'm used to reviewing picture books. It literally has five chapters, although they're all disjointed, like little short stories that aren't in any particular order and don't reference each other.

The first one is called "Spring." Frog runs up to Toad's house and says, "Wake up! It's spring!" Toad doesn't want to get out of bed. Frog makes him come outside, but Toad goes back inside to bed, saying "How long have I been asleep?" "Since November." "Come back again and wake me up at about half past May." Frog is upset because he's going to be lonely until then, so he goes and looks at Toad's calendar which is still on November. He tears off all the pages until he gets to May, and then goes to Toad and claims it's May. Then they go outside.

The next one is called "A Lost Button." Toad and Frog go for a walk, and when they come back to Toad's house, Toad realizes he's lost one of the buttons on his jacket. They retrace their steps, looking for the button, but they keep finding a whole bunch of buttons that aren't his, and Toad puts them in his jacket pocket. They finally get back to Toad's house, and Toad angrily stomps back inside, only to find the button on his floor. He feels bad about making Frog look for the button, so he takes his jacket and puts all of the buttons they found on it and then gives it to Frog the next day. Which is kind of cool.

The next one is called "A Swim." They want to go for a swim. Toad says, "I will go behind these rocks and put on my bathing suit." Frog doesn't wear a bathing suit. Toad says, "Well, I do. But you can't look at me when I'm wearing my bathing suit because I look funny in it." Then they get in water and they swim all afternoon and splash and stuff. A turtle comes along, and then Toad tells Frog to make the turtle go away because he doesn't want him to see him in the bathing suit when he comes out. Frog tells the turtle to go away, and the turtle asks why, and Frog says that Toad thinks he looks funny in his bathing suit and doesn't want anyone to see him. Some lizards and a snake and some dragonflies and a field mouse go, "Really? Let's all watch toad get out of the water and see him in his funny bathing suit. We want to see something funny." Toad is really upset by this. Frog, for his part, keeps telling them to go away, but they don't listen to him. Finally, Toad has to come out of the water and everybody laughs at him, including Frog, because he does in fact look funny in his bathing suit.

The last one is called, "The Letter." Toad is on his front porch. Frog comes by and says, "You're looking sad." Toad says, "Yeah, I'm said when I wait for the mail to come because nobody's ever sent me a letter." Frog says, "You know what, I have to go home." Then he goes home and writes a letter to Toad and gives it to a snail and says, "Take this letter to Toad's house and put it in his mailbox." Then Frog runs back to Toad's house, where Toad is taking a nap, and suggests that Toad wait for the mail some more. Toad says, "No, I'm tired of that." Frog says, "You know, somebody might send you a letter." Toad says, "No, I don't think so." Frog keeps looking out of the window, waiting for the snail to come, and Toad asks, "Why are you looking out the window?" And Frog says, "Because I'm waiting for the mail." "Well, there won't be any." "Well, there will, because I sent you a letter." "You did? What did you write it?" Frog says, "I wrote, 'Dear Toad, I am glad that you are my best friend. Your best friend, Frog.'" "That makes a very good letter ." And they sit out there happily, and wait for the mail, and then four days later the snail finally gets to Toad's house and gives him the letter. "Toad was very pleased to have it."

So some of the stories are good. "The Letter" is pretty cute, and so is "A Lost Button." "The Story" is terribly boring. In "Spring," Frog just full-on lies to Toad about what month it is in order to get him out of bed. It's irritating. "A Swim" is just mean-spirited. Let's all laugh at the self-conscious person. The weird thing is, he doesn't seem all that upset when it happens. He says, "What are you laughing at, Frog?" And Frog says, "I am laughing at you, Toad... because you do look funny in your bathing suit." Toad says, "Of course I do." And then just goes home. Maybe Frog needs to help his friend pick out a bathing suit that looks good on him. Trivializing that kind of self-conscious anxiety does not demonstrate good values to children.

But the stories do show quite a bit of compassion from Frog to Toad. Toad is kind of the standard "Gloomy Gus" stereotype, sort of like Bert and Ernie, where Toad is Bert, and Frog is Ernie. Frog is more rambunctious and outgoing, trying to enjoy himself but still with an empathetic side (except when he lies to his friend about the month). It's a mixture of good and not-so-good. Not quite bad. If the only one in the book was "Spring," I'd probably classify it as "bad", but the rest of the stories mostly counteract that on Frog's part. Yes, Frog laughs at Toad's bathing suit, but he does his best to get people to leave Toad alone when he's still in the water. In the first story, though, maybe he could be more honest about what he wants, which is somebody to spend time with. He could say, "I really would like it if you woke up right now, because I enjoy spending time with you." But no, he tricks him, and then everybody's okay with that? Does Toad ever figure it out? When he does, is he mad, or is he just like, "Well, that's Frog for you"?

Various. It's okay to lie to your friends to avoid being lonely. Do nice things for others. It's okay to make fun of people for wearing ugly clothes. Stories are boring. Remind people that you enjoy their company.

They do (slightly) reference each other—in The Letter, Frog is wearing the jacket with all of the buttons that Toad gave him at the end of A Lost Button.