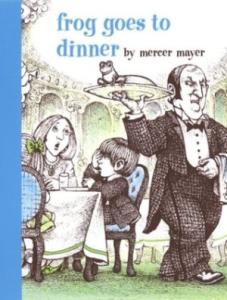 That was an odd book. No words aside from environmental ones. I don't know if all the copies are rather small, or if it's just the publication run that I got from the library.

A boy goes to dinner with his family. He has a couple of pets. One of them is a frog. The frog stows away in his pocket. They go to "Fancy Restaurant." They sit down to order. The frog jumps around and gets into antics, like messing with the instruments of the band, and jumping into somebody's salad and freaking them out. It jumps into somebody else's glass of, presumably, alcohol, and kisses him on the face. Then the the waiter, or maitre d' or whatever, goes to throw the frog out a door labeled "Fire exit" and the boy sees that happening (his family is trying to get him to be quiet) and gets up and takes ownership of the frog. So the entire family gets kicked out of the restaurant. As they drive home, everyone else is angry at him. When they get home, his parents send him to his room. He goes in the room and then he and the frog laugh.

Okay. I don't even. There's no real point to this book. The frog gets the family in trouble and then suffers no consequences for this. The child is punished as if he had done something wrong, which he really didn't. It has a cute look. In the absence of words, you end up judging it more by art. I didn't care much for the story, but the art is pretty good. The characters are drawn with clear emotions that children should be able to interpret easily. I guess the story is simple enough that preliterate children can probably figure most of it out by themselves. I'm not sure they'd understand the location without reading "menu" or "fancy restaurant" or exactly what the waiter was doing without reading "fire exit".

I guess it's just supposed to be funny, but I didn't think it was. I found it rather annoying instead. I don't like trouble for the sake of trouble, or things like pranks.

Yup, it's odd but that's the charm

This book is one in a family of classics about this boy and his pets. They're most well-known for their use in the linguistics and speech-pathology/communication disorders research communities. Their wordless nature allows children to be creative in their interpretation of the book. I suppose language researchers like them because they illicit a nice balance of functional nouns, verbs and adjective or maybe it's because it's easier to compare new language data to old when there's this huge body of research describing and hypothesizing about typical and atypical language development using the Boy Dog Frog family of literature. The social problems like "who gets punished?" and pranks and such make for excellent communicative enticements if you've ever been a clinician working with an especially closed-mouthed kiddo.