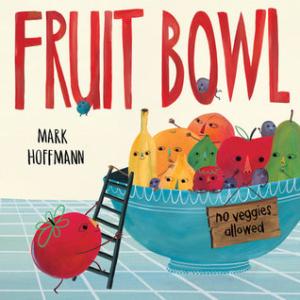 It feels like it's supposed to be metaphorical, but then it turns out that it's absolutely not metaphorical, and it's literally just talking about whether or not tomatoes are fruits.

All the fruits and vegetables are not only sentient, but have faces, arms and legs. There's an unpictured human of some kind who just went shopping, and the fruit all walks out of the grocery bag into the fruit bowl. Then there is a bit of a disagreement because the tomato walks into the fruit bowl, so the tomato leaves and gets a book to prove that it's a fruit. The tomato explains that fruits all started as flowers, whereas vegetables come from other parts of the plant: leaves, petals, stems, roots, etc. Fruits have seeds, and vegetables don't. The human disagrees, saying the tomato isn't sweet, but the tomato points out that cranberries and grapefruits aren't sweet, but they're clearly fruits.

The other fruits don't believe the book, so they go talk to a character called Old Man Produce, who is a prune that is apparently forgotten in a corner of the kitchen. He seems rather philosophical, but they ask him to get to the point, and he says that tomatoes are fruit. So the tomato goes in the fruit bowl, and brings along the other "vegetables" that are also fruits, like peas, eggplants, peppers, and squash. Then the vegetables who remain in the produce drawer are jealous and wonder why they don't get their own bowl. The back of the book shows them making some kind of plan to try to get into the fruit bowl.

I don't know what's so special about the fruit bowl. Do they not realize they're all going to get eaten? Do they want to be eaten? They don't seem happy about it. This reminds me of Arnie the Doughnut, where most of the main characters are sentient food (most of which actually wants to be eaten).

I guess it teaches facts about what things are fruits and what things are vegetables, but things that are biologically fruits are not necessarily culinarily fruits. A tomato milkshake does not sound as good as a peach, strawberry, banana, or apple-- even a grapefruit milkshake sounds better. There's a difference between the way that we use culinary fruits and culinary vegetables. And they don't even bring pumpkins, also biologically a fruit, into this. A pumpkin would just be massive compared to the other characters, and wouldn't even fit into the fruit bowl.

Yes, there are times when one word means something totally different to scientists than to the average person. Good examples are the words "law" and "theory." In everyday language, "law" means something that the government mandates. But, clearly, the government does not mandate the Law of Thermodynamics. And the Theory of Relativity isn't just a guess, it's an observation. Time behaves differently for two people if one is moving very quickly relative to the other. The only guesses are about the specifics, and those guesses are very, very good. And this difference in language also causes problems, like when evolution deniers whine that the Theory of Evolution is "just a theory." Scientists know that evolution happens, and they only have disagreements about the tiniest of details.

This book is really all about prescriptivist grammar, while disguising itself as some kind of way of teaching children what fruit. There are so many books about where fruit comes from and flowers that I'm certain there have to be better ones than this.

But this book doesn't know what it wants to be. Does it want to be a goofy story about sentient, walking, talking produce? Or does it want to teach biology? One thing that doesn't quite get resolved is that the human tells the tomato, "Get in the fridge or you'll go bad!" Which is a good point.

And I thought about it for a while, and I'm pretty sure the only reason we leave fruit in a bowl instead of the fridge, where it would last longer (yes, even bananas), is that you can grab it and eat it as is (and it won't dry out, like celery or carrots). You want the fruit to be visible so you'll remember to eat it, since it's healthier than junk food. You can grab an apple, rinse it off, and chow down immediately. Nobody's going to do that with a tomato. Tomatoes take more preparation. They're usually combined with other things (like in salad, BLT sandwiches, or sauces). And you're certainly not going to walk by and decide you want to bite into a pumpkin.

We put things in the fridge because they go bad quickly or because we don't need them to be in our face to remind us they exist. If I'm going to eat a tomato, I'm going to plan to eat that tomato, and what I'm going to do with it. Unless I'm baking a pie or something, I'm probably not going to do that with an apple, so it makes sense to have it within easy reach. It would clearly last longer in the refrigerator, and, at least in my house, we put things like strawberries in the refrigerator because they go bad within days.

Maybe we should call the "fruit bowl" something else. But this book certainly doesn't convince me to put tomatoes in it. Especially not ones with arms and legs.

I think maybe this book was just an excuse for the author to make a bunch of fruit puns, because they comprise the majority of the text.