I cannot tell a lie. But this book can. 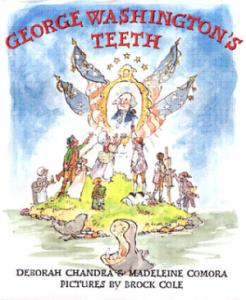 This book is very strange. It's published as a fiction book, which makes sense as it doesn't follow the timeline at the end. In rhyme, George Washington loses his teeth over time, incorporating real events but rather out of order. And the ending of the book just isn't realistic. When he gets his first full set of dentures, it immediately pulls out his last tooth. And when he gets his second, custom, pair of false teeth after losing all of his original teeth, carved entirely from hippopotamus ivory, and they fit perfectly and he dances around happily.

In the timeline at the back of this same book, it clearly takes at least six years for the last tooth to come out, and it is extracted by a dentist, and he gets several sets of dentures in the meantime. It's not until a year before his death that he gets a final set made entirely from hippopotamus ivory. Every set of dentures, including the last one, required significant facial strength to keep his mouth from popping open. And the rhyme, of course, completely glosses over the fact that many of the dentures Washington wore were made, at least partially, from "human teeth," as the timeline puts it. Not even the timeline mentions that many of these teeth were taken from slaves.

The book almost seems like it's trying to set the record straight about Washington never actually having wooden teeth, but it fails at this because it's not accurate about what actually did happen, even according to its own timeline! At least it's not marketed as a non-fiction book, but kids aren't going to know that, and most parents probably won't even notice. But I guess ultimately the book isn't really about what the teeth are made out of, it's about dealing with problems.

Washington had problems with his teeth that were completely fixed by hippopotamus ivory dentures.