In the words of War, "Why Can't We Be Friends?" 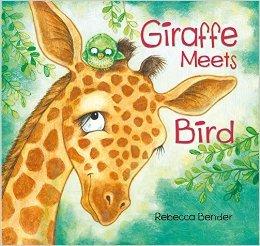 There's a giraffe and a bird. They're both male. They meet when the bird hatches in a nest. Giraffe watches Bird get older and they have to be nice to each other. Bird is kind of annoyingly chipper and noisy sometimes, which annoys giraffe. They don't want to "share the tree," which is kind of strange, seeing as how the bird apparently doesn't know how to fly yet and it's not like giraffe can climb trees. Then the giraffe scratches his head against the huge tree, and somehow that causes the bird to fall out. Giraffe notices a lion coming, grabs the bird, and "scoops him up and jumps so high, they land in the tree." That sounds it could be awfully dangerous for a giraffe. Giraffes don't really jump much, because their legs are so spindly that they're very prone to breaking. So they curl up in the tree together. In the morning they realize that the tree is a bad place to be, for both the giraffe (because presumably giraffes aren't supposed to be in trees although it doesn't explain why) and the baby bird (there are lions nearby). Then they leave the area on the back of an elephant to look for "a new home to share."

What? What is the point of this book? This is very bizarre, and the way that it's written and the way the text is presented make it seem like it's trying to teach children adjectives. It's not that the syntax is extremely basic or anything, but the first page reads, "The first time Giraffe meets Bird, he's surprised. The moment Bird sees Giraffe, he's amazed." And "surprised" and "amazed" are both in a font that is bold and twice as large as the other words. The important adjectives in a sentence are displayed bigger, so it's almost like it's screaming. From somebody who's used to the Internet, it's like that word. "If Giraffe wants Bird to give him a scratch, he has to be POLITE." "Polite" is in this massive, dark text. It's so weird.

And the whole thing is just very contrived. I'm not sure why this young giraffe is hanging out with this baby bird, or where the rest of their families are. Especially because at the end, when they leave on the back of an elephant, that elephant is one of three elephants that are together, including a baby elephant. And when it's nighttime and they're trying to think what they're going to do in the morning to get out of the tree, you can see on the ground that the lioness that was attacking the bird earlier has three lion cubs. So it's like everybody else has a family, but for some reason this young giraffe and this young bird have been abandoned.

It seems like it's trying to say that you need to be nice to people for them to like you back, which is a decent message to have. It kind of reminds me of the book "Grumpy Cat" (not to be confused with the internet superstar). Both of the books have two characters who are having difficulty getting along until one of them rescues the other one, although "Grumpy Cat" is different because the kitten and the cat have a different kind of relationship. But it's a pretty common trope in stories for a close relationship to be built on somebody saving somebody else's life, which is just strange since it doesn't happen that often in real life.

Even creatures that don't get along at first can learn to appreciate each other.