The Girl Who Said Sorry 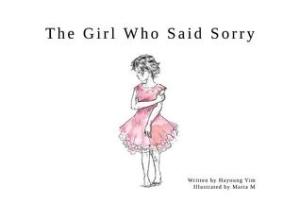 This book is something I bought through a Kickstarter. It's got a good message. Girls do a lot of apologizing for how they are. As a woman, I probably do say sorry too often. It talks about a lot of mixed messages that children, especially girls, get. "They told me, 'You're too quiet,' then said, 'Don't talk so loudly.'" It's probably not uncommon for boys to get that as well. Speak your mind, but don't be bossy. Be a winner, but don't make anybody else feel lousy. Some phrases are more specific to girls, like 'Don't be shy, but still be a lady.' And the girl narrator just keeps apologizing, because she can't be both contradictory things.

The title makes it sound like it's going to be some kind of like fable, or possibly a fantasy story, but it's not. It just climaxes when everybody tells the narrator, "You say sorry a lot!", and she says sorry for that, and then realizes that it sounds silly, so she resolves not to apologize for expressing herself. Maybe she could have had something more obvious trigger her change of mind? It just seems kind of arbitrary for that to be the thing that finally gets to her. So it's a good message, but not well executed.

I think that really, the reason it's bad to apologize all the time is that it implies that you did something wrong. And if people are giving you mixed messages on how to be, it's not your fault, it's theirs. And truly, being yourself, as long as it doesn't hurt anyone else, is not wrong. "For my words and choices that don't hurt anybody else," as the book says, no apology is needed. Just because they don't align with somebody else's idea of how you should be, doesn't mean that you're wrong. And I think the book is missing the understanding of that fundamental truth. Whatever color you want to wear is irrelevant. It shouldn't matter to anybody else's happiness, and if it does, it's not your fault.

Don't be sorry for things that you do that don't hurt anyone else.