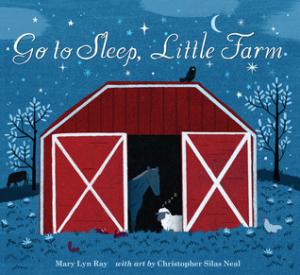 It's imaginative, but the meter really bugs me and the way that verses are often split across several pages. The worst one: "Somewhere a beaver weaves a bed in a bog", turn the page, "Somewhere a bear", turn the page, "Finds a bed in a log." Ugh. Also, "den" doesn't rhyme with "in" where I live. And I don't think that rabbits actually sleep in a "rabbit pile" above ground. I believe they sleep underground in their burrows, because they're rabbits. It doesn't seem very safe to sleep in a large pile of rabbits. But it gets all imaginative: "Little fish lie still in a brook. Somewhere a story goes to sleep in a book. Somewhere a worm sleeps in the dirt. Somewhere a pocket sleeps in a skirt." Okay.

It's kind of like "Goodnight Moon." It just goes on... everything is sleeping. Minutes are sleeping in clocks. Slippers are sleeping on rugs. Okay, everything sleeps in this world, even inanimate objects. And then the last page is a mother whispering into her daughter's ear, "Go to sleep, little ear." Just her ear? Wouldn't that be uncomfortable, like your arm falling asleep?

The little girl lives on a farm, although the vast majority of things that are going to sleep are not farm-related. Beavers, bears, owls, and foxes tend not to live on farms. "Chickens roost where chickens will", and the chicken is of course standing on the crescent moon, presumably sleeping there. And the trees are sleeping. Okay, okay. I get it. This is one of those books that's just meandering, but it's supposed to be meandering, because it's supposed to bore the living daylights out of your child so they'll finally go to sleep. "Oh, everything is sleeping. Everything is still sleeping." I don't know, that just doesn't work on my kids. They're just like, "Seven more books, Mom."

Interesting use of colors in the pictures. All the outside things are definitely desaturated because of the lack of light, so the pictures are good. The poetry doesn't flow TOO badly. Just kind of a gentle putting-you-to-sleep book that probably goes on for too long, but it's trying to go on for too long. Which is the weirdest thing to me.

Everything sleeps, even inanimate objects.