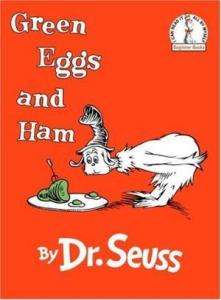 I'm not really sure what to think about this book. I mean, I read it when I was a kid; I had it read to me. It's a classic book. But I'm trying to look at it with fresh eyes.

It's well-written. It's well-rhymed. It's funny. The pictures are amusing. But the story basically boils down to this: a character, who is never named, is sitting reading a newspaper. This other guy, Sam, keeps rushing by him with signs on various animals, annoying him, and it's unclear why Sam's doing it, and then he offers the main character green eggs and ham. The main character replies that he doesn't like them, at which point Sam begins a litany of questions at this guy. "Would you like them here or there?" "Would you like them in a house?" "Would you like them in a car?" Sam just follows the guy around, going through these ridiculous situations, trying to get him to eat this frankly moldy-looking food. At the end, they end up falling in the ocean (I think) with the main character, again, vehemently denying that he likes this food, like he's got some kind of thing to prove about it or something, and then Sam finally suggests to the main character that he try them. The main character says, "If you will let me be/I will try them, you will see." Basically, "If eating this food is what it takes to get you to leave me alone and stop destroying my life with all this random crap going on, I will." And then he eats them, and he likes them.

I think it's supposed to be a metaphor for trying to get children to try new foods, because children will often deny that they like something without ever having tried it. Most adults don't claim to dislike a food before they've ever tried it. I guess children do sometimes come up with strange rules about when and where they will eat certain things (and I guess I do know of at least one adult who refuses to eat hot dogs unless she is at a baseball game). Taken in that light, it makes a lot of sense. Taken the way the world works for adults, it's basically one person harassing another person, until they consume dangerous-looking food. That would be like chasing somebody around, practically assaulting them with animals and vehicles, until they agree to eat leftover tuna that's been in the fridge for who knows how long.

Again, as I said, if you take it from the perspective that a child will likely take it, I'm probably reading too much into it. A child will look at it and think, "Oh, there's a lot of food I don't like, and my parents sometimes resort to ridiculous lengths in order to get me to eat food that I claim to not like, and it sometimes turns out that I like it," so I think they'll identify with that. I guess the important part is that the main character does like it.

But there's no real reason given in the story for Sam to be an authority on food. In fact, in the beginning the main character says he doesn't even like Sam. There's no reasons given for anything in this book, at all. You can make up your own reason. You can say that Sam is trying to give the main character a gift of something that Sam really, really, likes, knowing it's not dangerous, but declines to explain that to the main character. And the main character thinks it looks dangerous, but declines to explain that to Sam. Despite the entire text being dialogue, there's not enough communication going on in this book. It kind of reminds me of the conversations I have with my own toddlers, so I guess it's accurate.

The message is kind of mixed from a modern perspective. Again, the book is very well written, the rhymes are excellent, and the meter is impeccable. Dr. Seuss: great writer. I'm just not sure I agree with the message of this book.

Try new foods. Or, if you keep annoying somebody enough, they'll give in to what you're asking for.

Not sure you could say it was a *metaphor* since Sam was indeed trying to get Not-Sam to try a new food, unless you're saying that the "child" part was the metaphor.

Other than that, I liked your review! My favourite part was when you pointed out that if Not-Sam was a child, the plot would make sense, but as he's an adult, it kind of doesn't.

I never considered that Not-Sam might think the food looked dangerous. Depends how common they are in this universe I guess, which is something the book doesn't go into.

Yeah, the "child" part was the metaphor I was referring to. Maybe "metaphor" isn't quite the right word.