Nobody's as gruff as a gruffalo. 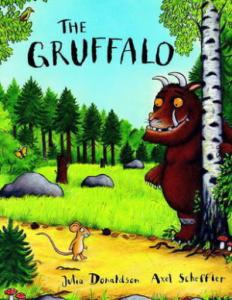 It's another story where the main character is a "trickster," which basically means they lie a bunch. It's not bad, especially because the main character is lying to save their own life. There's a mouse, and a fox sees the mouse and implies that he's going to eat him. The mouse says, 'No, I'm going to wait for my friend The Gruffalo, who's scary and gigantic and likes to eat foxes.' The fox leaves in fear, and the mouse says to himself, "Silly old Fox! Doesn't he know? There's no such thing as a Gruffalo!" The mouse then encounters an owl and a snake, using the same story on them, getting more descriptive about the imaginary monster. Suddenly, he encounters a Gruffalo, exactly as he had described. Which is a rather unusual twist for a trickster tale. The Gruffalo threatens to eat the mouse, but the mouse shows the Gruffalo that the fox, owl, and snake are all afraid of the two of them (obviously to the reader, because they are afraid of the Gruffalo, not the mouse, but the Gruffalo interprets it as them being afraid of the mouse), and then the mouse threatens to eat the Gruffalo, who leaves in fear. The end.

Like I said, it's a really unusual twist to have the thing that a character is explicitly, intentionally lying about, turn out to be true. Of course, as in most "trickster tales", it relies on the "tricked" characters being complete idiots. For me, this doesn't paint the trickster as clever or intelligent, just lucky and dishonest. If the mouse wasn't trying to save his own life, this would have a bad message, but as it is, it's just middle-of-the-road. It's perfectly reasonable to lie to somebody to save your own life.

The rhymes are actually pretty good. The meter is good, nothing feels forced, and it seems like it would work well being read aloud. And the descriptions of The Gruffalo are interesting. I guess people enjoy seeing others get tricked. Of course, as is the case in similar stories with anthropomorphic animals, you have the moral quandary of intelligent animals eating other intelligent animals. If they were all humans instead of animals, this whole thing would be highly disturbing, but they're not, so it's not. So I guess it's okay for a talking fox to eat a talking mouse. I know it's a convention we're pretty used to by now, but that doesn't mean it isn't weird.

People who try to hurt you are stupid, and will fall for obvious tricks.