I can’t figure out the point. 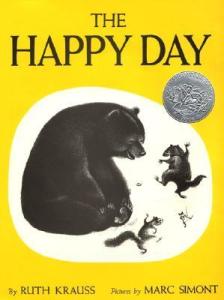 Well. That was a book. It's really repetitive, with very simplistic language. The story takes place in winter, when a bunch of animals are hibernating. They all come out of hibernation and they go find a flower in the middle of the snow and have a dance party around it.

It's very long and drawn out, though very sparsely worded, for what actually happens. Every time the animals do something, it has to mention each species individually. Field mice, bears, snails, squirrels, and groundhogs. "They sniff. The field mice sniff. The bears sniff. The little snails sniff in their shells." And on and on. And they all together, with no distinction between predator and prey, come to happily dance together when they find a flower. "They cry, 'Oh! A flower is growing in the snow.'" And that's the last sentence in the book. It ends with all of the animals staring at the one spot of color in the entire book.

This book is way too long for what is going on here. The text is clearly written for quite young children. It would be very easy for younger children to understand. But I'm not sure a book this long would hold their attention easily. It's really a product of its time, where children's books were very long and used oversimplified, horribly repetitive language. Nowadays children's books just have more action and characters, or else they're more poetic, which was a trend even when this book was written. I guess it's really a trade-off between brevity and descriptiveness. There are very few adjectives in this book. Some of the other books from the time period tend to go overboard with flowery language, but there's got to be a middle ground somewhere. This wouldn't hold the attention of an adult reader.

And let me make clear that my reviews are written to consider the adult reader's perspective in addition to the child. People often have this idea that children's books should only be reviewed by imagining what a child gets out of a book, but for one, I'm not a child, and it's been long enough that I'm not a reliable source of a child's perspective (and I seriously doubt most of the people who make this argument are, either), and for another, given the target age of this book, it needs to be read to them by an older person. Usually that's an adult.

To recap, the book is really boring. It's not bad. There's no bad message to it-- in fact, I'm not sure there's much of a message at all. Maybe something vague about the changing of the seasons, but it's obviously not supposed to be realistic. Animals do hibernate, but they don't hang out in large groups around whatever flower they can find. And I don't think anybody would argue that it's trying to be realistic in that sense. It's not trying to teach us anything scientific. It's just trying to make a silly story about animals and a flower and it's... boring. It's really boring.