I roll my eyes. 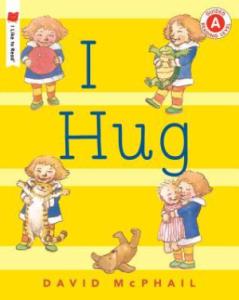 It feels like the author didn't even try to write an actual book. The art is of spotty quality. I'm not familiar with David McPhail's other illustration work, but I'm not impressed by what he did in this book.

The main character is a little girl who has funny hair, which makes her look like a clown. This is basically the modern-day equivalent of "Dick and Jane." As I have said in many other reviews, kids don't need this kind of thing to learn to read. This is the most boring book. There's no story line. Every single spread is the same thing: on the left, a sentence beginning with "I hug" and just a single subject, and on the right, an image depicting the action. The first one: "I hug my cat." The second one: "I hug my dog." Then this girl goes around hugging so many different things, including inanimate objects, and then hugs her parents and then goes to bed. The last sentence is, "I hug."

Kids don't need this. Who thinks that a child's attention is going to be even moderately held by this? I kind of understand the idea, like if you were trying to give it to like an extremely remedial reader. According to the rating system on the book, it is for the lowest level of reader. But this isn't even Dick and Jane level; it's lower level than that. The average person could come up with the text of this book in 15 minutes.

This reminds me of first year Spanish class in high school, where we spent the first day making sentences that all began with "Me gusta" just to get the idea of Spanish across. "Me gusta la playa." (I am given joy by the beach.) "Me gusta correr." (I am given joy by running.) "Me gusta los gatos." (I am given joy by cats.) The sentence construction helps if you're trying to give someone a list of words, but not if you're trying to hold the attention of a child, or teach them to read. It makes sense for the first day of Spanish class, so maybe it would work for a child who was beginning to learn English? But it wouldn't be something they'd come back to over and over again. For any child whose first language is English, who wasn't raised in a forest by bears or whatever, by the time that they get to the level where they're starting to read, this is going to be so trivial to them as to be almost insulting. It's just slightly higher level than an alphabet book, and an alphabet book can have so much more variety and interest than this.

Nothing is happening in this book, other than this child going around hugging various objects and creatures. That's it. There's no emotion. Presumably the child enjoys hugging things, otherwise she wouldn't be doing it, but there are so many better books than this out there, and like I said, it just feels like the author didn't even try.

Children who are learning to read need really simple books.