Not as good as the show. 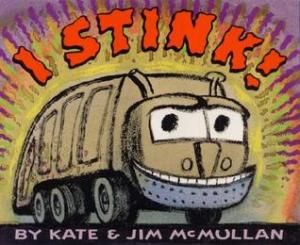 I read the board book version. This book is from the point of view of an anthropomorphic garbage truck. It just talks about the properties of garbage trucks and then halfway through goes off on a tangent discussing trash items that start with different letters of the alphabet. The dump truck takes the trash to the river and dumps it in a barge, and that's basically it.

Does New York City not have dumps? It's just strange. The garbage truck takes things to the barge instead. In my city they go to the dump. I did not know that garbage trucks were "dual op," with two sets of steering wheels, gas pedals and brakes. It's kind of refreshing that the book doesn't even try to rhyme. There's a lot of nice noises and things like that.

I'm actually familiar with the Amazon-produced show "Stinky and Dirty" which is roughly based on this character. They definitely go in a totally different direction in the show than this. Except for minor resemblances, I wouldn't even think that it's the same. In the show, the garbage truck is a little kid and the vehicles don't seem to have drivers. In this book, a lot of the expressions on the face of the garbage truck make him look more like an adult, and he mentions his driver several times. And in the show, Stinky (the garbage truck) takes trash to the dump instead of a river barge.

It's not bad. The quote on the back from Child Magazine: "Perfect for kids who revel in the yucky--and their long-suffering parents." Really. If you don't like the fact that your kid "revels in the yucky," then getting them this book is not going to make your life easier. You're going to read it to them, and they're going to love it. I didn't find it terribly interesting as an adult, but my son is a huge garbage truck fan and would probably love it.