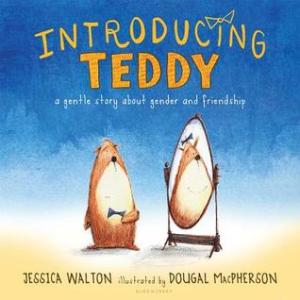 It's cute, but there's not a lot to it. I guess the subtitle, "A gentle story about gender and friendship," is a good description. Gentle, slow-paced, and brief.

A little boy named Errol has a teddy bear named Thomas. They play every day. One day, Thomas isn't feeling good. They go to the park, but it doesn't cheer him up. Errol asks Thomas what's wrong. Thomas says, "If I tell you, you might not be my friend anymore." Errol says, "I will always be your friend, Thomas!" Thomas explains that he's not a boy, he's a girl. And she wishes her name was Tilly, not Thomas. Errol says that's fine with him. Errol calls his friend, Ava, who is putting together a robot (she's almost aggressively non-stereotypical), and she comes over to play. Errol explains that Teddy has a new name, Tilly. It's kind of strange that Errol refers to the bear alternately as "Teddy" and as the bear's name, especially since "Teddy" and both names start with "T", which makes it rather confusing. Tilly moves her bow tie onto her head, making it a hair bow. Then they have a tea party. The end.

It's okay. There's no real explanation of anything. It's just assumed that Tilly would worry about Errol's opinion of her gender, without explaining that some people are prejudiced that way. Young enough children might not understand the worry if they haven't encountered that sort of thing before. Ideally, nobody would encounter that sort of prejudice, but since we do, addressing it is useful. Glossing over this the way it does almost invalidates the difficulty that a lot of people have with this. On the other hand, the way that it's presented, nothing happens. It's treated as a complete non-event. Which, although that's the ideal way for it to happen, doesn't make for a very interesting story. Nothing happens other than the complete avoidance of conflict, and a handful of play activities. It ends up boring. Basically, they've taken something which should, in an ideal world, be a non-event, and made it a non-event, and then made a book telling the story of this non-event. It's like telling the story of somebody putting their socks on. It's not interesting anymore. This book could be improved by talking about how much better Tilly feels now that she's expressing what she feels inside, how much better it feels to be yourself rather than hiding who you are. Or, alternatively, if it's something that she just discovered about herself recently instead of suffering in silence for a long time, how much better it feels to understand yourself more than you did before. As it is, there is so little character description in this book that I don't identify with these characters and I don't really care what happens to them beyond the average nondescript character. The writing does not make it easy to empathize with these characters.

It's okay to express the gender that you feel, even if that gender is not the way you externally appear.