The Iron Man (AKA The Iron Giant) 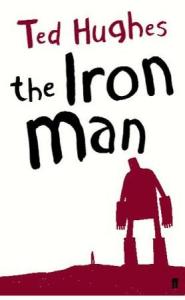 I read the 2010 illustrated version. A strange, fantastical book. Way too long to read to a child in one sitting. I've never seen the movie based on it, but from the synopsis on Wikipedia, the story is quite different. Due to the length of this book (as opposed to other picture books I review), I'm including the spoiler warning.

A giant ("the size of a tall tree") man made of iron appears, erm, wherever this story takes place. A farming community. Nobody knows from where. In the first few pages, he falls off a cliff, breaks into a gajillion pieces, and then the pieces put themselves back together (which is the sort-of twist ending of the movie). He only ever finds one ear. He lives in the ocean during the day, and at night he goes out into the world and eats metal objects, like tractors and barbed wire. A boy named Hogarth sees him and tells his father. The father believes him. Some other people believe or disbelieve. People notice their tractors with huge bites taken out of them, and giant footprints, and start seeing the giant as well. Clearly they don't like having their tractors and stuff eaten, and who knows what else he's going to eat (people, etc.), so they set a pit trap for the giant, but the giant doesn't fall for it. Eventually Hogarth lures him into it, and they bury the giant and assume he's gone forever.

Next spring, the giant digs himself back out of the pit and starts eating things again. The people suggest getting the military involved, but Hogarth suggests instead that they should just lure him over to the scrap metal yard and let him eat scrap metal. And everyone's okay with this and they do it and life is good. He just eats endlessly, apparently, and I guess there's an endless supply of scrap metal.

Then "one day" a giant object in outer space approaches Earth at enormous speed. People start panicking. Before crashing into earth and killing everyone, though, it stops moving and a smaller object comes out of it, referred to as the "space-bat-angel-dragon." This creature lands on the continent of Australia, only avoiding killing absolutely everyone there by virtue of the mountains pushing it a bit away. (The book states that people who happened to be on mountains at the time are killed but there's nothing to be done for it.) SBAD demands in a voice that humans are somehow able to both hear without dying and understand that he be fed "living things", people, trees, whatever, or else it will start eating whatever living things it likes, leaving "the world looking like a charred pebble." The people decide, nope, that's not gonna happen, and attack it with their weapons. It's super ineffective! It laughs and says they have a week to feed it.

Hogarth goes to the iron giant, who suddenly and mysteriously gains the ability to speak, and together they come up with a plan. The iron giant is dismantled and shipped to Australia to be reassembled (since he's too big to be shipped all at once), where he addresses SBAD in a voice it is somehow able to both hear and understand. He challenges SBAD to a contest of strength, which SBAD for some reason accepts (reasoning that "when this silly little creature has finished his antics, I'll just lick him up"). Suprisingly, instead of this being something like "The Brave Little Tailor" where the giant wins via trickery, it's an actual contest, albeit balanced for the participants. The giant has people build a massive fire, and lays in it until he is white-hot. Then he comes out and tells the SBAD to go fly into the sun until he is red-hot, which SBAD does, coming back somewhat the worse for wear. Then they repeat the process, the giant ending up with a slightly melted ear and SBAD ending up rather ragged-looking. When the giant suggests they go for a third time, SBAD cries uncle and says the giant has won. Why SBAD went through with all of this and didn't just pre-emptively eat the giant at some point is left as an exercise for the reader. Since SBAD is now "the slave of the earth," the giant asks him what he can do, and SBAD can only fly and sing super-peaceful songs. He apparently was only trying to eat people because hearing people being all warlike made him want to join in. So he is then tasked with flying around the earth, constantly singing "the music of the spheres," which is so super-peaceful that people stop fighting. The end.

Bwha? Yeah, I can see why they changed it drastically for the movie. According to Wikipedia, in the movie, the giant is explicitly from outer space himself, and Hogarth lives in Maine. Hogarth hides the giant in a barn for a while. There's a new character, beatnik Dean McCoppin, who owns a junkyard where they pretend the giant is a sculpture. He's not as ravenous as in the book, and they apparently hide him from everyone else in the world, except for a paranoid government agent named Kent, who is the antagonist (no SBAD in this version) and brings the military into the small town. The giant apparently has a bunch of weapons, but only acts in self-defense. After the giant saves two boys from falling off a roof, the government agent convinces the military to attack it, and then it retaliates, especially when Hogarth is unconscious and the giant thinks he's dead. So the military launches a NUCLEAR MISSILE at an american town, at which point the giant has to fly off into space or something and intercept it to avoid killing everyone in the town. The apparently-destroyed giant is hailed as a hero and then the pieces independently move back together in the ending twist (as opposed to in the book, where the process in the beginning is explicitly described - the hands move independently but blindly until they find the eyes, at which point they can see and reassemble everything else in the area, and he is missing an ear from the beginning since he never finds it).

It's like the only thing they kept in the movie is the concept of a very large man made out of metal who eats metal, and can somehow reassemble himself, and the boy Hogarth. But I guess the giant is voiced by Vin Diesel, so that's awesome. I bet if Don Bluth hadn't passed on the project, it would have been amazing, and probably a lot truer to the book.

Back to the book: the illustrations are great, if a little abstract. The text design is also quite inventive. As far as the story goes, it's... strange. The text is well-written, but the plot goes in unusual directions that aren't properly foreshadowed. There's no indication that the giant can withstand high temperatures until he does so. Or that SBAD can't until he doesn't. He lives in a STAR, for crying out loud. There's no indication that the giant can talk until he does so. The whole SBAD-singing-magical-peace-songs totally comes out of left field. It really reads like a dream, where everything makes sense until after it's over and you're just sitting there going, "How did I think that made any sense while it was happening?"

Befriend everything of unknown origin; it's definitely peaceful.