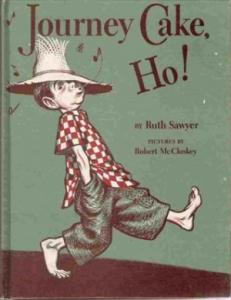 This is an interesting story. It's kind of reminiscent of The Gingerbread Man, or The Golden Goose fable, where a bunch of people try to pluck feathers from a golden goose and get stuck to it.

There's a little boy named Johnny who lives with an old woman and an old man in a log cabin on top of a mountain. The story is pretty old-school. The woman makes wool by herself, they have a wood-burning stove, and that kind of thing. The woman's name is Merry, and the man's name is Grumble. It's unclear whether Johnny is their son, servant, or what sort of relationship he has with them. She's usually happy, he's usually grumpy. She likes to make Journey Cakes, which seem to be kind of like pancakes, only thicker. She makes them on a griddle out of cornmeal. The old man is a subsistence farmer. Johnny does a bunch of other chores on the farm, and they're fairly content in their life. Then they have like a string of bad luck where wild animals carrying off some of their livestock, and everything's sad, and they start running out of cornmeal. The old man says they don't have enough food to feed all three of them, so they tell Johnny to go "find [him]self a new master and a new ma'am." The illustrator depicts the woman as crying, and the text says she's sad, but it's still unclear whether he's their son. The man says, "What must be, must be." The woman says, "And luck follow after." She bakes Johnny a massive Journey Cake that is "large, round, and crusty-hard."

As he is walking with it in his "sacking-bag", which is something like a coverless backpack, it bounces out, rolls down the road, and starts singing. It's not really anthropomorphic in any physical sense, but it sings, "Journey Cake, ho! Journey Cake, hi!/Catch me and eat me/As I roll by!" Johnny chases it, and is joined shortly by a cow, a duck, two sheep, a pig, a flock of red hens, and a donkey who is "fresh". The cake rolls all the way down the mountain and back up the mountain in a big circle. Johnny hears the crow from the farm, realizes where he is, and then "The Journey Cake spun around twice and fell flat. 'I'm all of a tucker!' It hollered." And everybody else goes, "We're all of a tucker." The animals just decide to live on the farm, and the old woman and man come running and hug Johnny, and everybody's happy again. Johnny explains that it's all because of the Journey Cake, and the old woman goes "inside to freshen it up on the griddle." Her song becomes, "Warm up the Journey Cake;/From now on it's Johnny Cake." The end.

So it's kind of like The Golden Goose, because the ending is kind of unexpected and not really related to the beginning, but somehow solves the problem. It doesn't really build up in the refrain like "The House That Jack Built", only having the Journey Cake repeat its song, and the different animals responding with things like, "At flying I'll beat you./I'll catch and I'll eat you!" It seems like fairy tales have a strange fascination with runaway pastries. I understand why Johnny's chasing it: he's poor and hungry, and it's his to begin with. But why are all the animals so fascinated by it? They can barely tell what it is.

Sometimes poor children have to go make their own lives? Or, Everybody loves pastry.