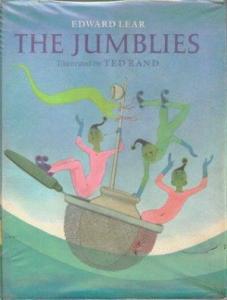 A book of nonsense. The poem is vaguely familiar, though I've never seen this illustrated version before. "In a sieve they went to sea," "Far and few, far and few,/Are the lands where the Jumblies live:/Their heads are green and their hands are blue;/And they went to sea in a sieve." Apparently these creatures are tiny, because they're in a sieve and a crockery jar, and they've got a veil and a tobacco pipe for a sail and mast. The sieve starts sinking, so they wrap their feet in paper to keep them dry, and somehow they keep floating. They get to some other lands and buy a whole bunch of random stuff, and come back home 20 years later. All the other Jumblies throw them party and give them a feast, and the rest go, 'You know what? That was a great idea. We should do that too.' What is this book trying to say, if anything? Was it a bad idea? Don't listen to other people when they tell you what you're doing is stupid even though it clearly is? Maybe it's just pretty words to rhyme and be silly. I don't know if there's some kind of deeper meaning behind this or not.

These illustrations are very interesting. The pig they buy is the color of the sky, clouds and all. There's a giant, realistic looking, Stilton cheese. It's... interesting. It's not great, but it's not bad. It's just goofy.

If you do something impossible, everybody will be jealous. Or, maybe there is no message.

we did the play in New Zealand in 1980.I was the Quangle Wangle who sat at the foot of the crumpetty tree.i shagged 3 of the 4 jumblies. happy days

Simple. It's trying to say

Simple. It's trying to say that sometimes it needs imagination and courage to try to do what appears to be impossible. But unless you are an exception, to try the exceptional, you can't achieve new and interesting things.