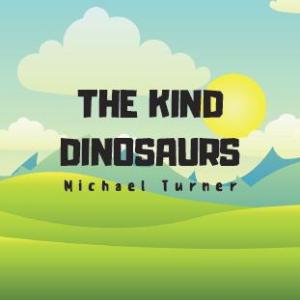 This is a self-published book, and the author reached out to me and asked me to review it.

This seems more like the introduction to a story than an actual story. It's not all that short by page length, but the amount of text per page, and what's conveyed, is just so small. It uses the first two pages to basically say, 'This happened a long time ago.' It takes the next six pages to introduce the characters. It then states that they want to make new friends, asks how they can do that, and says it's by being kind. Then it shows four examples of the five dinosaurs being kind. Then it says, "Being kind makes the world a better place!" And "Let's be kind and make friends today!" Three questions for the reader to think about, then, bang: The end.

Although it states that the dinosaurs want to make new friends and even explains how they can do so, they never make any new friends. The three questions at the end are: "Why do you think it is important to be kind?" "What happens when you are unkind to others?" And "How can you start being kind today?" This would have been much more useful as a book if, instead of asking those questions, it actually answered them. It spends so much time setting up its premise that it doesn't get anywhere. And these five particular dinosaur species (or orders, in one case) chosen did not all live at the same time in history. For example, there's no way that Terry the Pteranodon could have shared a chocolate donut with Stevie the Stegosaurus, since the stegosaurus species died out at least 60 million years before the pteranodon species appeared. Even if chocolate donuts had existed back then, and the dinosaurs could talk.

I can sum this entire book up in a sentence (and a short one, at that): "There's some dinosaurs who want to make new friends, so they're kind." It doesn't go anywhere. It doesn't teach us anything. It just explicitly states that being kind is good and does not explain why. I tend to chafe at people just stating things like they're obvious, especially when presented to children. Clearly, I'm not saying "Don't be kind." It's a bad idea to be unkind, and I would much prefer that my children be kind. But this book does not explain why, and it's really not that difficult of a concept. You don't need a degree in psychology or sociology. If someone is kind to you, it feels good. Being kind to someone makes them want to be kind to you. Bam. You don't even really need a theory of mind for that one. You could even discuss the idea of altruism, if you were feeling particularly wordy.

Thankfully, it does give a couple of examples of being kind (although one of the examples is cleaning up after yourself, which is more like taking responsibility than being kind).

Each dinosaur seems to have exactly one image created of it, which was then copied and resized throughout the book. If they weren't drawn as vector images, they should have been, and then it would be easier to resize them without changing the stroke size. If they were drawn as vectors, they shouldn't have been expanded or rasterized before resizing. An inconsistent stroke size looks very haphazard, and coupled with the copy-and-pasting, makes it look like the artist was lazy.