The King Who Rained 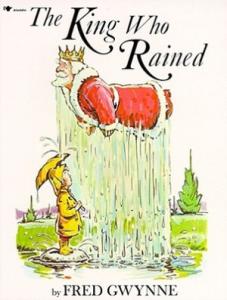 It's not bad for a 1970s era children's book. The illustrations are kind of sketched, like they were done in crayon or possibly pastels. The entire book is just a list of idioms, like, "Daddy says there are forks in the road." And the illustration for the spread is a bunch of giant forks where roads would be, with cars and trucks driving over them. There's some overdone ones, like "Sometimes Mommy says she has a frog in her throat." And it's a woman looking at herself in a hand mirror, and there's a small frog inside her mouth, the child who's narrating the book looking on, shocked. I do like the, "My big sister's getting married and she says I can hold up her train." And the little kid is holding up this locomotive engine in the middle of a church. Then they get kind of ridiculous after a while, where it's just wordplay instead of idioms, like "Mommy says not to bother her when she's playing bridge." With a woman who has basically stiffened herself and laid out like a plank, with her feet on her chair and her head on a couch, and a dog and a cat walking across her. And, "I've heard Daddy talk about the foot prince in the snow," showing a man in a purple suit with feet all over his tunic.

The book is just goofy. It doesn't really have much of a story, but it's not bad, especially for a celebrity book. It's well done; it's put together and everything; there's just not much to it.