Ambiguity is fine for adults, but it may or may not work for kids. 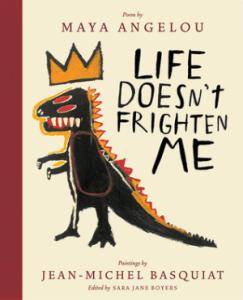 It's well-written. The artwork is well-executed (I've never been a big fan of Basquiat). They did a fairly good job of matching probably unrelated paintings to the text of the poem. I'm not that familiar with Angelou's work but she's clearly a good poet.

I'm not sure of the actual perspective of the viewpoint of this poem. I'm not sure if the speaker is literally not frightened, or if they are, but are trying to convince themselves that they're not. It names a bunch of fairly scary things like ghosts, dragons, lions, and dogs, and states that they make fun of them and shoo them away and they're not frightened at all. Then they mention a suspiciously specific circumstance: "That new classroom where/Boys all pull my hair/(Kissy little girls/With their hair in curls)/They don't frighten me at all." This feels more like wish fulfillment for whoever Angelou intends the speaker to be. Then the poem goes off about "I've got a magic charm/That I keep up my sleeve,/I can walk the ocean floor/And never have to breathe." Which seems like it came of nowhere, but definitely supports the idea that the speaker is fantasizing. Like, 'In an ideal world I wouldn't be afraid of life, but, yeah, I'm pretty terrified of it.'

Is the poem trying to say, 'Don't be afraid of life; face it head-on'? Or is it trying to say, 'Everybody is secretly afraid, but we just project a false air of confidence'? And is that ambiguity going to get through to a child reading this book? It seems like a picture book is really a strange choice. It's marketed as juvenile poetry, but it seems like this would have been better aimed at somebody who would really understand it, like adults. I mean, I'm not saying that the average child doesn't understand projecting an air of confidence when you're scared, but are they gonna get the subtext? My five-year-old certainly wouldn't. I don't know at what age they actually would.

Amazon says this is aimed at ages 4+, but this would go right over a preschooler's head, and unfortunately that might mean they would get a message that it's not okay to be scared. Plus a list of scary things that maybe they'll be able to "shoo" away and maybe they won't.