More of a window than a mirror for my kids. 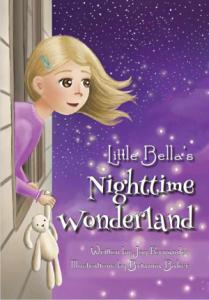 This book was given to my by the author to review. As a presumably self-published book, I may be less blunt than usual, and I certainly don't want to discourage anyone from writing and publishing their own books. Self-published books are usually more a labor of love, and I try to recognize that.

A little girl named Bella is going to bed. Her mother brushes her teeth and reads her a book, and then Bella asks to look outside. Her mother says yes (that would be a pretty weird thing to disallow). The whole rest of the book is her watching the animals she sees outside her window, then going to sleep and dreaming about the animals.

As somebody living in Southern California, this book doesn't really make sense. We don't even have half of these animals here. We don't have foxes or fireflies. We've got deer, but they're nowhere near most people's houses. Most of us (and I would think this would include people in other parts of the country, as well) don't have houses that border on the wilderness. And around here we don't have forests. Even if I could see the wilderness outside my window, it would be chaparral or desert.

So, at my house, if I looked outside at night, I'd see a fence. And above it, the neighbor's house. On the other side, I'd see the street. As far as insects go, we've got mosquitos. Everyone does, really, but you never see people trumpeting their majesty. We've also got things like moths and crane flies, but they're not much to look at in the dark. If I saw animals around here at night, they'd probably be outdoor cats. Lizards and snakes keep to the daytime. Once in a great while, I might see a possum, or a raccoon, or even a coyote. In the air, pretty much only rare bats. Owls are pretty uncommon. I guess we would hear crickets, though. Maybe those are everywhere.

So to me, living in a suburb, it's baffling that this child is able to see quite this many animals from her house. And I'll nitpick about crickets-- they don't sing. They rub their legs together, which would make it difficult to leap from blade to blade at the same time.

There's not much to the actual book. It's written in rhyme, but the meter is off, and some of the rhymes feel forced. It's not a bad book, nor does it have a bad message. It just feels like this book was written for the author's family and they decided to try to publish it for the world. Perhaps the author has a daughter named Bella. The author's note does mention that she "resides in the beautiful countryside outside of Fredericksburg, Virginia." So as far as wilderness goes, she's lucky, and I'm glad she and her kids appreciate it. But it's so caught up in the beauty of nature and the awkwardness of its rhyming that it doesn't recognize that this situation is unusual.