I dunno, electricity is nice. 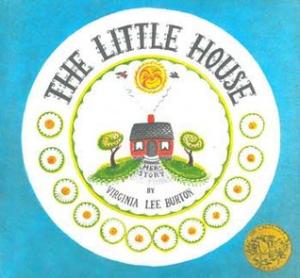 It's kind of a maudlin book. The main character is the personification of a little house that is built out in the country. "The man who built her so well said, 'This Little House shall never be sold for gold or silver and she will live to see our great-great-grandchildren's great-great-grandchildren living in her." It talks about how the house is in the countryside, and at night she watches the stars, and what it's like in the different seasons. She hears about the city and kind of wonders what it's like. "One day the little house was surprised to see a horseless carriage coming down the winding country road." Then they build a road next to her, and build more houses and gas stations, and then more roads, apartments... Everything crowds around her, but no one wants to live in her so she just kind of stays there. There's a trolley that goes by her, and an elevated train in a subway, and then they tear down the apartments and tenements next to her and build up skyscrapers, and she feels terrible and nobody's living in her and she's all broken down. Then one day, "Along came the great-great-granddaughter of the man who built the little house so well." And she says, 'Hey, it looks kind of like my grandmother's house when she was a little girl, except that was out in the countryside.' And they realize that the area used to be countryside, but isn't anymore. Then they go to some movers and the movers say, 'Yeah, the house is well built so we can move the house somewhere else.' So they put her on a truck and take her out in the middle of the countryside and paint her and fix her up and then she's happy again.

It's another one of those books decrying industrialization. If you think about it, that little house built back before cars and before any roads were in the area wouldn't have had air conditioning or central heat. It probably didn't even have indoor plumbing if it was so isolated. Obviously, it could be retrofitted, but the book just seems nostalgic for the past, like it's saying that things were better back when everything was countryside and we didn't have roads and cars and things like that. But there's so many trade-offs that it doesn't take into account, and it's a very simplistic and naive way of looking at the world. It just boils down to a house that likes living in the country, and then the country changes to a city, and then somebody takes her back to the country so she's happy again. Looking at it from the house's standpoint, it's a perfectly reasonable story. It's not great, but not bad. And it's rather dated.

Some houses prefer to be in the countryside.