The metaphor breaks down when you examine it. 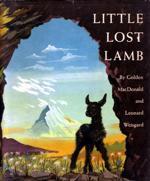 This is clearly a parallel to the Parable of the Lost Sheep. In the book, a shepherd boy has a bunch of white sheep and one black sheep. According to my research, black sheep are more common than I thought. It's a recessive gene, which would make the percentage about 25% if nobody cared, but white sheep are preferred so they're bred more often. The book says, "It was the black sheep born in every flock." Like there's always exactly one. Anyway, the book talks about where the flock feeds in different seasons, and then eventually they go higher in the mountains than before, and the book waxes on about how awesome this valley is. The shepherd boy cuts himself a whistle, and his dog is sleeping, and the black sheep wanders off. When everybody realizes he's gone, they look for him, but they can't find him. The mother sheep freaks out, the boy blows his whistle, and the dog looks for him, but the black lamb is having too much fun, so the shepherd gives up and takes his other sheep home, where they'll be protected by his neighbors at night.

But mountain lions live nearby, and the boy lies in bed and just freaks out and can't sleep. He wants to wait until morning, but he just can't get over it, and gets up and gets his dog and climbs the mountain in the dark. He can hear a mountain lion, but he's more worried about the sheep than himself. He goes up to the high valley where he was and there's a mountain lion there. His dog chases it away, and they find the little lamb and bring him down.

The only real sense this makes as a story is if you know of the Parable of the Lost Sheep and feel like it's actually desirable to risk your life (and your dog's life) for the life of a single sheep. The shepherd is explicitly a boy, though it's not clear exactly how old he is. The sheep is an actual sheep, and not even a particularly useful one at that (black wool was less desirable). And I've read "Where the Red Fern Grows"-- I know that in a battle of dog vs. mountain lion, mountain lion usually wins. Especially in the dark, in the mountain lion's territory. Nothing about this would be a good idea in reality. This is like the end of the movie "Indiana Jones and the Last Crusade", where his dad says, "Indiana, let it go." It's sad, but he needs to move on with his life. The other sheep can't survive without a shepherd. Sure, there's other villagers who would take them in, and probably be happy to, but the metaphor really breaks down when the indestructible Jesus is replaced with a very mortal kid.

Despite that, I can't say it's really a bad message. It's not really a good message, either. It's mostly just bizarre.

Sheep are worth risking your life over.