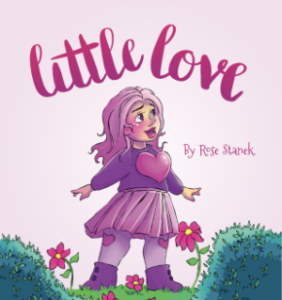 This book was given to me by the author to review. I don't ever want to discourage anybody from writing or publishing books; I just think that some people maybe need a little more practice and honest feedback before publishing their first books.

There's a girl named Little Love who has "a hole in her heart." Clearly they don't mean literally, like she doesn't need surgery or anything. She's trying to get happy, but she can't. She tries Fame and Fame doesn't work. It doesn't clearly explain why, except that for some reason she has no close friends? It feels like this book is written for younger children, but the topics that it discusses and the language and metaphor it uses seem like they would be confusing for children that young. Sometimes the author writes in fairly basic language, but just assumes that we all understand that Fame isn't all it's cracked up to be. Then LL goes out and tries Beauty, but Beauty is very difficult. She seems to dislike what she sees in the mirror, even though she's worked very hard at it. At that point, her own reflection, except dressed in white, walks out of the mirror toward her. A version of her who is happier. Then she suddenly sees that... everybody's pretty? That didn't seem to be her original goal. "There's beauty in many./Not one is the same./It's inside that matters,/Not fortune, or fame!" I notice that she doesn't say "everyone" is beautiful, just "many." Apparently what she was looking for is the love within herself. Which you think she would have understood from the beginning, given that her own name has the word "love" in it.

This book is written in rhyme. The rhymes are of varying quality, as is the meter. For example, the line, "She shined oh so bright." It's got a couple of questionable word choices, "shined" versus "shone", and "bright" versus "brightly", which are matters of opinion and usage. But the part that really sticks out is the "oh so", which is only there to pad out the meter, and is a rather amateur thing to do. A better choice would be to change the whole line around until it fit the meter, rather than adding superfluous words in.

It is a fairly didactic book, which I was not expecting. I was actually expecting something sappy instead of something preachy. The main character spends so much time trying and failing to find happiness, that it's not really explained why love was the right answer. The illustrations just show her smiling at old people (I don't know what's going on with that page), playing with some dogs, reading to somebody, baking cookies, and feeding soup to somebody in a hospital. Does that make her feel happy? Why? And why did Fame and Beauty not have the same effect? It doesn't really say. And those things seem more like compassion and kindness, not "love" per se. I mean, clearly there's different definitions of "love", but I wouldn't say that baking cookies in and of itself is an expression of love.

I'm a little confused by this book. It's got pretty pictures, I'll give it that. I like the color scheme the main character has going on, with pink hair and a pink and purple outfit. But I'm not sure exactly how old she's supposed to be. She looks like she's supposed to be a little girl (like she's much shorter than the personified Fame and Beauty, for example), but when she's going through all the discomfort of "Beauty", she wears makeup and "plucks" like someone who's at least a teenager. And she seems to be wearing makeup for most of the book, unless the full fuchsia lips and blushing cheeks are her natural color (like maybe the pink hair?). Maybe she's an adult with dwarfism. She never does anything particularly childlike.

Fame and beauty are unimportant. What's really important is love.