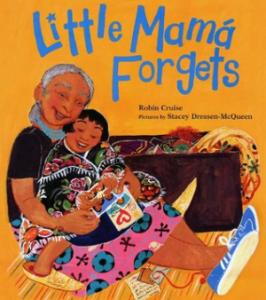 I'm not sure exactly what's supposed to be going on with "Little Mamá", the titular forgetful character. At the end it says, "Almost everyday, Little Mamá forgets... names and places and people and words. She forgets so many things she once knew." So is she losing her memory as she gets older? It doesn't seem like she has Alzheimer's. It certainly seems like she's mostly in control of her faculties. Although there is a part where she forgets to like wait for the light to turn green before she crosses the road, or forgets which way they have to turn to get to the store. But on the other hand, she remembers how her granddaughter likes her rice pudding (maybe it's just how she herself likes it, and she's not actually remembering?).

Also, it seems like she intentionally forgets things. It says, "Almost every afternoon, while Antonio naps and Mama studies, Little Mamá forgets... that she and Paco and I are supposed to sleep a little too." And instead of sleeping, they play with things that are in her old trunk. "Some evenings Little Mamá forgets... that there are only five of us for dinner." And so they make a kajillion tortillas and then she has the whole family over. But then, other days she forgets how to tie her shoes and brush her teeth. She doesn't seem to forget who people are, which is pretty common in Alzheimer's. She just forgets weird things.

It's okay. There's nothing really bad here. I guess it's showing the main character interacting with her grandmother even though she's losing her memory. She seems to remember things that are important to the granddaughter. Which, like I said, is rather inconsistent with the forms of memory loss that I'm familiar with. She forgets that the granddaughters name is Lucy, not Luciano (which is Little Mamá's name). Why would she call someone else by her own name? Maybe it's Lucy's mother's name, too? I feel like I have to make a lot of excuses for this book to make sense.

People with Alzheimer's usually forget the most recent things first. But when did Luciano learn that the light needed to be green before she crosses the street? The book says she used to live in Mexico. Is that not a thing there? And tying shoes and brushing teeth? That's something that Alzheimer's patients forget, but that is usually further in the development of the disease, like around the time they forget who their loved ones are. And usually Alzheimer's patients have behavioral issues as well, including aggressiveness and confusion, which Luciano doesn't display at all. She seems pretty chipper all the time. And apparently Lucy's mother feels okay leaving her kids with their grandmother (although she is implied to be nearby), so she's not worried that Luciano will lash out at them or forget how to take care of them.

I don't know what the future holds for Lucy and her grandmother. It sounds like it's probably going to be depressing, though. I really don't know what this book is trying to accomplish. Maybe understanding that people who forget things are still people?

The summary says that "Lucy finds that she still remembers the things that are important to the two of them." And there's a part of the book that's about how she and her family are Mexican-Americans, and the older family members used to live in Mexico. And there's a little bit of Spanish in there for the educational aspect. And it's good that the book actually portrays someone who is losing her memory as she ages. But it'd be nice if it was more accurate.

When you lose your memory as you age, you lose things kind of randomly and sporadically.