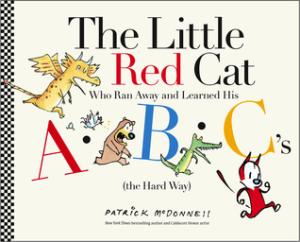 It's an alphabet book. It only does one word per letter. There could have been more there. It's interesting in that it doesn't actually say until the last page what the words are; it just depicts them. It starts with a cat leaving his house and then there's a page with a letter "A" on it where he encounters an alligator and on the page with the letter "B" there's a bear, but it doesn't say the words "alligator" and "bear" until the very end (except on the letter "L" where he's lost and it shows a poster that says "lost" on it). It's a cute idea. There's actually a little bit of a storyline, quite rare in alphabet books, although in a lot of cases it doesn't make much sense. They go from the ice to the jungle, with no clear reason for the animals to be chasing the cat, and then they fall off a cliff, and then when the sun sets they all get tired and they're rescued by a king with a unicorn and then everybody gives each other Valentines and they go home happily. What?

Learning the alphabet is important.