Lumberjack and Friends to the Rescue! 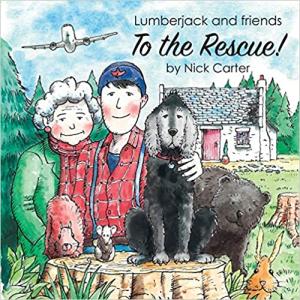 The story is very basic. There's a man named "Lumber Jack," which is a little bit confusing because the advance copy I received is titled "Lumber Jack and Friends", though when I find the book online it's "Lumberjack and Friends to the Rescue." Anyway, Lumber Jack lives in Canada, and his aunt lives in Scotland. There was a storm in Scotland, and his aunt's roof was damaged. So she sends him a telegram, oddly enough. I have no idea what time period this is supposed to take place in, though he's later depicted as having a microwave, and flying in an airplane. Why would anybody send a telegram? That seems weird. Is he so far out in Canada that they don't have cell reception? At any rate, he gets in an airplane and flies to Scotland to fix his aunt's roof. I'm not sure why he can't just send her money and hire someone in Scotland to help her. It'd probably be cheaper. Plus, he's a lumberjack. He cuts down trees; he doesn't fix roofs. He's not a roofer, that's a completely different job. Obviously, it's not impossible that he knows how to fix roofs, it just seems really strange that she asks him to fly all the way to another country just to fix her roof. I could understand if she was in the next town over, but Scotland is a long way from Canada.

So he goes home to his dog, Dudley, and explains that they need "to go on a long journey and live in a new home for a while." He's just fixing her roof, not building her a house. The dog decides that they need to take every single dog toy (three suitcases' worth). The next day, they go outside and spend an entire day saying goodbye to all the forest creatures, for some reason. They seem to have some sort of magical connection to them and way of communicating.

There's a long description of the airport and the airplane. It's about as long as the text of the part where they're actually in Scotland. The author keeps reusing the phrase "laughed and laughed". When his aunt drives them to her house from the airport, she says, "Let's unload the car and then have a nice cup of tea and some dinner." While she's in the kitchen, Jack goes outside, looks at the roof, and then fixes it before dinner is ready.

When you see the roof, it's in shambles. There's got to be debris and birds and other animals getting into her house. Yet she has all the materials lying around, and he fixes it in about 10 minutes. Then they go to bed. The end.

There's no... punchline. There's no real ending to this story, or anyone accomplishing anything slightly difficult. Why does he bother doing it himself? I still don't get that.

It's mostly well-written. There's some things that bugged me about the text here and there (How does someone "whistle at the top of his voice"? Why is it called "Lumberjack and Friends to the Rescue" when he's only got one friend with him, and they're not actually rescuing anybody?). It doesn't seem like a fantasy world, except for when they seem to communicate with the animals, but that's kind of an aside.

The last two sentences are, "And that's how Jack's great adventure in Glenlockie, with his best friend in the whole world, Dudley Dog, started. And boy oh boy were there some great adventures ahead for both of them!" For an adventure, this one was pretty boring, and spent way too much time in an airport. It's almost like the author thought of some really cool stories, but decided to write a bland prequel before he really got going, and I feel like I'd rather read the rest of those great adventures than this book.

Like I said, the writing is good, and the illustrations are great. It just needs a hook. Or a point. Something interesting.

Sometimes people need their roofs fixed. Or, fly across the world to do minor chores for your loved ones.