If these duck parents would only make up their minds... 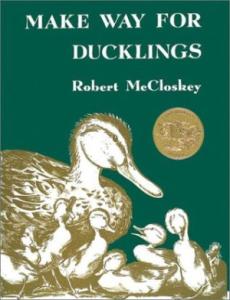 This is a bizarre book. Maybe it's more interesting if you live in Boston and actually know where these places are, but I've never actually been to Boston. And you can't expect ducks to be very intelligent, but this pair of ducks seems to be on the low end of the duck intelligence spectrum.

Mr. Mallard and Mrs. Mallard are looking for a place to live. They fly for a long time, and get to Boston and the Public Garden. They rest on a little island. People feed them peanuts. They like it there, but decide that they shouldn't stay there because there are people riding bicycles and it's dangerous. Then they fly to several different specific places in Boston, and eventually find a place to build a nest and have ducklings. "And only just in time, for now they were beginning to molt. All their old wing feathers started to drop out, and they would not be able to fly again until the new ones grew in. But of course they could swim." And so they they swim to the park on the riverbank and then there's a policeman there named Michael (who figures in later) who feeds them peanuts. Mrs. Mallard lays eight eggs, all of which hatch. They name their children Jack, Kack, Lack, Mack, Nack, Oack, Pack, and Quack. Is it just me, or does that imply that they previously had nine children who may or may not have survived, named Ack, Back, Cack, Dack, Eack, Fack, Gack, Hack, and Iack? Anyway, there's a lot of ducklings. Mr. Mallard goes off and says, "Take care of the ducklings. I'll see you in a week in the Public Garden." And Mrs. Mallard teaches her children how to swim and dive and different things. She actually doesn't seem to wait a week (who knows what kind of concept of time ducks have), it just says, "When at last she felt perfectly satisfied with them," they hike across town to the Public Garden. I'm guessing the ducklings can't fly yet. Can Mrs. Mallard? Who knows. But they go over to the highway and quack angrily at some cars that honk at them, alerting Michael the police officer, who comes and stops traffic for them so they can cross. He alerts the rest of the city police, who direct traffic until the ducks meander all the way to the Public Garden. This was published in 1941, so presumably the traffic back then was a bit different than that in most modern American cities, but there's got to be a significant amount of people who are angry because this duck is an idiot. The ducks get to the Public Garden and swim across to the little island, where the father is waiting for them. They like the island so much that they decide to live there, despite it being dangerous when they first got there. Well, thank goodness, because otherwise they would have to walk back to where they came from and mobilize the entire police force and who knows how often they'd have to do that. It'd just be ridiculous.

This feels so weirdly specific that it seems like it was based on a true story, but that doesn't seem to be the case. I don't really know what the point of this story is. Maybe it's saying that ducklings are important and we need to not hit them with cars. I don't know. The art is okay. It's a rather wordy book, which is a product of its time, and it's filled with so much geography of Boston that I don't think anybody who lives anywhere else really cares. And by the end, these Ducks are basically dependent on humans to not only direct traffic for them, but also feed them. Michael the police officer has been feeding them peanuts pretty much day in and day out. All eight of these ducklings are going to be raised unable to fend for themselves in the wild.

The people of Boston are nice to animals.