Useful for animals, not for people. 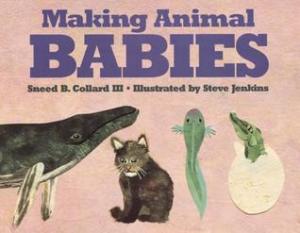 I heard about this book through an Amazon review that said that "How Babies Are Made" by Andrew C. Andry and Steven Schepp (which I thought was great) was far too explicit, and recommended this one instead. So I thought I would see what they were talking about.

This book is just boring. The art is actually done in a very similar style to the Andry book, with paper cutouts, although Sneed's are less detailed, seem to be semi-transparent, and also possibly include watercolor on top of the paper. There's a lot of images of various different ways that animals can reproduce, like budding and splitting, and a general description of sexual reproduction, with an image of a sperm entering an egg. It talks about marine animals that launch their sperm and eggs out and hope they find each other, and follows that with different kinds of mating rituals like fighting and the lights of fireflies.

It shows an image of frogs reproducing, which is basically hugging and launching sperm and eggs into the same general vicinity as each other, with no penetration. It also shows animals (possibly dolphins?) actually in the act of intercourse, although the image just consists of two identical animals, one upside down underneath the other, that are slightly overlapping. Absolutely nothing explicit, which means that it is unclear and provides no real explanation. The definition of "explicit", according to Merriam-Webster's online dictionary, is "fully revealed or expressed without vagueness, implication, or ambiguity : leaving no question as to meaning or intent." I'm sorry, but some of us prefer the direct approach to vaguely hinting at reality.

It then talks about animals that lay eggs, how different embryos grow, and actually shows a cat in the process of giving birth to a kitten, which is emerging from her. That is as explicit as it gets.

The book has an interesting writing style, in that pages have large text, maybe ten or so words, which gives a general description of the images on the page, and then smaller text which gives more detail. Maybe this is supposed to be aimed at two different age groups? The page with the dolphins (or whatever they are) has the large text of "And in many other animals, the male deposits his sperm directly inside the female's body." The small text goes on for quite some time discussing things like, "the male is equipped with an organ called a penis and the female has a tube or cavity called a vagina." And then mentions that the male puts his penis in the vagina, which is called intercourse, and is used by "most mammals, birds, and reptiles-- and by many other kinds of animals." Occasionally the book will mention humans, but there are absolutely none depicted. Which is probably desirable for people who are really prudish and don't want to discuss anything having to do with human sexuality, and may not even believe that humans are animals.

It's completely factual, but I feel like it's got so much information in it that it's boring. Maybe fans of this book are hoping that the details which are actually applicable to human sexuality will be drowned out be the massive amount of other information. I have to admit that I mostly just skimmed the smaller text blocks instead of reading them all, as it was a overwhelmingly large amount of text.

If someone is doing a report on different types of animal reproduction, maybe in a biology class or something, this might be useful information. Although I suppose most biology students are past the picture book stage. It just seems like overkill on a subject that very few members of its target audience would be interested in.

I guess you could technically use this to describe where babies come from to a kid but that doesn't seem to be its purpose. It spends so much time discussing other things that aren't relevant to human sexuality that either the writer was just really interested in different types of animal reproduction (I mean, it is mildly interesting that sponges, say, reproduce by budding), or was intentionally trying to obscure the information about people. I'm going to give him the benefit of the doubt and just assume he was a reproductive biologist.

I didn't feel like the large text and images sparked my interest enough to make me want to read the smaller, more detailed text, and something written in this style really needs to do that. I'm not sure whether that's a fault of the illustrations or the text. And I feel like they missed an opportunity to discuss why sexual reproduction is preferable to asexual, in increasing the speed of evolution, and that some animals can even reproduce both ways.