A fluff of a book. 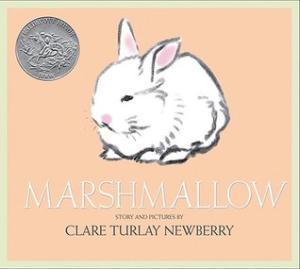 It's kind of a goofy little story. There's a woman named Miss Tilly who owns a gray cat named Oliver and then gets a baby bunny as a new pet. Oliver is at first afraid of the rabbit. Miss Tilly is a poet, and writes poetry about how awesome rabbits are because they're quiet compared to cats. Then Oliver starts trying to hunt the bunny, whose name is Marshmallow, so Miss Tilly puts Marshmallow in his own room when she's out for the day. Marshmallow grows more used to the apartment and starts nibbling things, and Miss Tilly writes a poem about how bunnies nibble everything. Then one day she's out, and Oliver is hungry and manages to open the door to the room Marshmallow is kept in. Marshmallow comes up to him, kisses him on the nose, and then snuggles up to him and Oliver starts licking him like a mother cat would to a kitten and the animals become friends.

It's cute, but there's not much to it. The poetry is silly. Apparently, the version I checked out from the library (the 2008 version) is the revised or adapted version, which makes me want to track down the original 1942 version because I want to know what changed. It's just kind of a middle-of-the-road book.