Messages In The Mailbox: How To Write A Letter 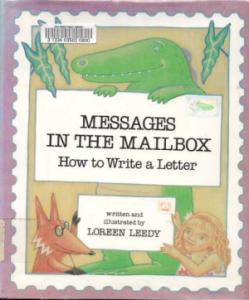 This is a weird book. It's obviously quite dated (written in 1991) since people don't generally write letters anymore. One of the weirdest things about it is that all the dates in the book (because apparently even in a letter to your best friend you're supposed to put your address up in the right-hand corner and the date) are 1999 and 2000, so they're dated in the future from when the book is written. Which is really bizarre. That takes a lot of self-confidence on the part of the author/illustrator.

It seems to be confused about its audience. Within the book, there is a class of children, many of whom are animals and some of whom are children, that seem to be perhaps about 6 years of age (but it's hard to tell because they're not very realistic). And the characters are cartoonish, with lots of anthropomorphic animals, but that's in contrast to the instructions in things like writing a business letter. With formats, and salutations, and closings, and signatures-- six-year-olds aren't going to need that kind of information. For the most part, they're gonna have trouble writing anything, let alone a full-on letter with addresses. Using a typewriter or neatly hand-printing, using an 8.5" x 11" piece of paper-- the amount of detail is fairly clearly aimed at like older kids who actually might write a business letter rather than a friendly letter, but the style of the book is very much aimed at younger kids.

I find it strange that in a friendly letter to your best friend or your grandmother, you should actually put, on the inside of the letter, your address and the date. Maybe the date makes sense, but putting your own address on the inside of a letter seems strange, especially because you're going to be putting your return address on the outside. And assuming that they're actually a friend of yours, they probably know what your address is, and you might not even be mailing it but handing it to them instead.

Of course, nowadays we just use email (and maybe there's a niche market for how to properly format those), but in 1991 clearly that wasn't a common thing. This book is either far too detailed for the age that it seems to be aimed at, or else it's far too juvenile for the actual people who the information would be useful to. It doesn't strike a good balance, and it's just like an instruction manual. It reminds me of the etiquette books that were fairly popular in like the 40s and 50s. The beginning is one of the human children in the class going, "Mrs. Gator, why don't we ever get any mail?" And then the teacher, Mrs. Gator, responds, "Maybe we need to write a few letters!" And then she just goes off for what appears to be several days explaining all the various kinds of letters and postcards and get well and thank you and sympathy and form letters and congratulations and fan letters, letters to the editors... Like, wow, okay. Enough. I have never met anybody this obsessed with letters. Maybe the author is in the camp that the letter is a dying art and it needs to be revived, etc. etc. A feeling which has clearly been around since before the advent of email given the publication of this book. But it's just a weird book. It's a really weird book.