The Most Wonderful Doll in the World

The most wonderful doll was inside you all along. 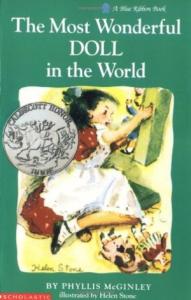 This is a weird book. The main character is a girl named Dulcy who has a bunch of dolls and apparently has a lot of difficulty telling the difference between fantasy and reality. She gets a toy doll from her neighbor and then loses it almost immediately. She starts describing the doll she lost to everybody, imagining all the amazing things this doll could do, getting more outlandish every time she tells the story.

The entire winter, Dulcy will not shut up about the stupid doll that doesn't exist. Anytime anyone mentions having a doll that does something, or that they themselves did something, Dulcy says, 'Oh yeah, my doll totally had that.' She just has to one-up everybody, except specifically with her doll. Maybe she always was a compulsive liar, but it seems really odd. And she spends so much time pining over this imaginary doll that she's no longer satisfied with her real ones.

After the winter is over, she finds the doll again, though it's a bit disheveled from being out in the weather all winter. Clearly, the doll had never been anywhere near as awesome as Dulcy imagined her to be. Dulcy is then confused, and has trouble understanding why the doll isn't the way she remembered, and her mom explains that she's been getting mixed up between what's real and what's fake. So when she's confronted with reality, she decides to stop being a compulsive liar and "grow up." At the end, she sees her neighbor again, and the neighbor asks about the doll. Dulcy says it's a good doll, but that she has a better doll that does all sorts of amazing (imaginary) things, and then the neighbor asks where she got it, and she says that she just made her up, but the other dolls aren't jealous. So she's still confabulating, but at least she's self-aware?

It's a fairly preachy book, but it doesn't really explain what it is she's doing wrong or whether she's aware of it. And then it doesn't really deal with the consequences. It's kind of like "Sam, Bangs, and Moonshine" except that where SBM has kind of an over-the-top consequence, this book really doesn't have any consequence.

Your imagination is always better than reality. Or, reality/growing up sucks.