You're a nice person. Here, have a prince. 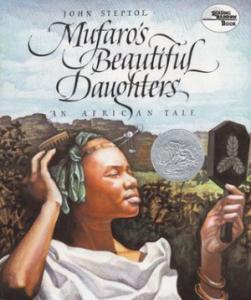 The father of these two girls is just oblivious, I guess. He's got two daughters, both of whom are beautiful (as the title of the book suggests). They are named Manyara and Nyasha. Manyara is a jerk, and Nyasha is nice. At some point, Nyasha wonders why Manyara is so unhappy, pointing out that she's clever, strong, and beautiful. But she doesn't seem very clever if she's incapable of listening to directions. Nyasha finds a friendly snake in her garden and names it Nyoka and plays with it and sings to it on a regular basis. Manyara is so mean to Nyasha, who is "too considerate of her father's feelings to complain, and Manyara was always careful to behave herself when Mufaro was around." Why does nobody else tell Mufaro, "Hey, Manyara is a jerk"? Or is she only a jerk to Nyasha? The summary says "Everyone--except Mufaro--knew that Manyara was selfish, bad-tempered, and spoiled." How does he not know? I guess she's clever enough to hide how much of a jerk she is.

Some messenger from the city comes and says, "Hey, the Kings looking for a wife," like you do in the standard folktale/fairy tale thing. Manyara tries to talk Mufaro into only sending her, but Mufaro says both of them are worthy and he can't choose. Manyara sneaks out that night instead of waiting until the next morning, because she wants to be there first. A small boy is in the path, and asks her to give him some food. She says no, and is just a jerk to him. She encounters a woman sitting on a stone who says, "Trees are gonna laugh at you. Don't laugh back. Then you'll see a man with his head under his arm. Be polite to him." Of course, she totally ignores that advice. When Nyasha wakes up, everybody freaks out at first because Manyara is gone, but then they wee her footprints heading to the city and figure out what happened. Nyasha heads off and encounters the same small boy. She feeds him. The old woman appears and she feeds her as well. The woman says nothing about trees or a man with his head under his arm, and Nyasha doesn't encounter them for some unexplained reason. The woman just points the way. It's unclear whether she appears in a different place. So she makes it to the city, which she's in awe over the beauty of. As she's coming down the hill to the city, Manyara runs up screaming not to go to the king, because "There's a great monster there, a snake with five heads! He said that he knew all my faults and that I displeased him. He would have swallowed me alive if I had not run. Oh, my sister, please do not go inside that place." Which is pretty nice of her. Seriously, she just wants to save her sister from presumably being eaten alive. She's not lying or trying to trick her sister, she's just literally concerned for her sister's welfare at this point, which is a really kind gesture on her part, especially from such a jerk. You would think that if she really didn't like her sister all that much (earlier in the book she says, "I'm gonna be Queen someday and you're gonna be my servant"), then why would she even warn her about that? It seems to have taken Manyara a longer time to arrive, as well, since she's just leaving as Nyasha arrives.

Nyasha gathers her courage and goes into the chamber, and the little garden snake that she met earlier is sitting on the stool. She's like, "Hey, how's it going? Why are you here?" And then the snake, who has never spoken to her before, says, "I am the King. I am also the hungry boy with whom you shared a yam in the forest and the old woman to whom you made a gift of sunflower seeds. But you know me best as Nyoka. Because I have been all of these, I know you to be the Most Worthy and Most Beautiful Daughter in the Land. It would make me very happy if you would be my wife." At least he offers her the option. I mean, there was no real reciprocal relationship on his part as a snake, but he has a legit reason for believing that she's the most worthy daughter. And so they get married, and Manyara becomes Nyasha's servant, and Mufaro is super happy about that, apparently. Probably more happy about the Queen thing, but, you know.

The names of the characters are from the Shona language. The story was "collected from people living near the Zimbabwe ruins." The images are probably done with pen or pencil, or maybe paint or pastels. It's hard to tell. The style of the illustration is so realistic that I'm gonna guess he was working from actual models, perhaps photographs of these models (I later learned the girls were both based on photographs of the artist's daughter) which ends up making some images look strange. In one, the father stands between his daughters, sort of staring off into space, and Manyara is in a weird position, with her elbow bent up and pointing out, and Nyasha is on the right, kind of sad, looking off into space as well. It's clear that they're three separate pictures; there's just something weird about that image, like it's lacking the proper depth. It looks like the two daughters are way in front of the father, but instead he's got his arm around them.

Also, when Manyara is talking to the small boy in the road, he's got this weird, pointed ear. Is that supposed to be reference to the fact that he's normally a snake? I mean, snakes don't even have external ears. And oddly enough, though the text describes the old woman as "silhouetted against the moonlight" and "seated on a large stone," all the image shows is her shoulders and face surrounded by tree branches. She's peeking through the bushes, almost like she's trying to hide, which is really bizarre-looking. Maybe all he had was a bust portrait of this woman and thought, "What am I gonna do? I'll put some leaves around her. Yeah, that looks good."

The summary says it's about pride going before a fall, which I guess you could say, but it's really about just being nice to people. Politeness is a pretty common cross-cultural theme. It's very common in Japanese anime, like the movie "Spirited Away." Beyond that, it supports helping the needy (feeding the boy) and expressing your thanks with material gifts (the sunflower seeds to the old woman). But why aren't you supposed to laugh at the trees? Just because the old woman said not to? Nyasha would probably have been polite to the man carrying his own head, regardless of whether she was told to. It also kind of tries to have the moral of "Follow directions." It implies that if Manyara had only followed directions, she'd have gotten through her trials. Obviously, she didn't have a prior friendship with the king in the form of a garden snake or whatever. So maybe the moral is just like, "Be friends with snakes, because they might turn out to be kings." I don't think she would have gotten picked even if she did listen to directions. Even if she was just as kind as her sister (temporarily or permanently, even), she didn't have that friendship with the garden snake, so I don't know. Maybe I'm analyzing this too much. It's not a real story. It didn't really happen. Snakes can't turn into people; people can't turn into snakes; the end.

Be kind, and you'll be rewarded.