In a world... where there are only birds and rabbits... 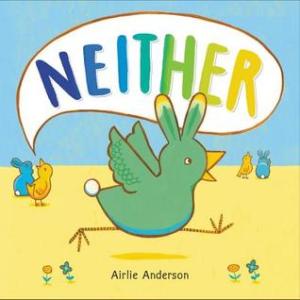 I like the message, the art is cute, but I feel like the way that is presented is somewhat confrontational. Even when the main character finds somewhere to belong, it's done in an almost confrontational way.

So they tell him to leave. 'Go away. You're not one of us.' They taunt him as he flies away. He flies and lands in a place where everything is really weird. There's a cat with butterfly characteristics (or a butterfly with cat characteristics, depending on how you look at it). There's a tree that's talking to him. There's all kinds of strange things, like a fox-kangaroo with a unicorn horn, an armadillo-rabbit, a bear with butterfly wings, or a lobster with bird wings. The rabbit-bird is from The Land of This and That, and they say, 'This is The Land of All. Come play with us!' He says, 'But I'm not like any of you!' And they say, "Exactly!" Some other creatures from The Land of This and That come, a rabbit with a rat-like tail and a bird with green dots on his wings, who are looking for a place to belong. The rabbit-bird seems mad at them because they chased him away (although it's not clear these individuals were part of the crowd before). But then he says, 'Everybody can come here. Everybody's welcome.' It seems like nobody in The Land of All is like anybody else there. So what would they do if a bunch of identical blue rabbits arrived?

I'm not exactly sure what it's trying to say. I get the message-- the author in his bio talks about "the beautiful in-between-ness of things", and how he started sketching these creatures and the book grew from that. It's nice to imagine a place where everybody can belong, but it's not realistic, and it's not done in a way that a reader gets any information to act on. The way the other animals in The Land of All say, "Exactly!" implies that he wouldn't be accepted if he weren't different from everyone else. It's nice that the rabbit with the rat tail and the bird with green dots are foreshadowed, shown hiding and watching the rabbit-bird before they speak to him.

What I think would be nice is kind of a recognition that maybe all the identical creatures aren't really "identical." That would be a nice direction to go with this. Something like, 'We're not all the same, even though we look like it. We have different desires. We're different inside.' Or maybe, 'Some of us are different on the outside, we're just better at blending in.' And maybe it takes the birth of this bird-rabbit to wake everybody up to the fact that they're not exactly one way or the other.

I think it's supposed to be a metaphor for gender or something along those lines, or bi-gender, where you're like internally different from everybody. Because there are a lot of people who say that we are in a world where you are either male or female, but that's not true. It's not always the case that everything's clear cut. But then he goes to The Land of All and then there's people who were just nothing like him. So what does that say about The Land of This and That? Where do these creatures come from? Do they have parents? The rabbit-bird hatches from an egg, so it's not clear if he has parents. Maybe this world has spontaneous generation, like you put out cheesecloth and you're gonna get rats out of nowhere.

It's kind of an interesting fantastical thing, a kind of wish fulfillment. I wish there was a place for everybody like this, but there really isn't. I wish that our world was more like this, but it's not. And I think that in order to get the world more like this, you have to metaphorically go back to The Land of This and That and say, 'Hey, you guys are wrong.' It's missing the realization from the people in The Land of This and That. They're not correct. Either they're not actually one or the other, or that they were wrong for chasing away the rabbit-bird thing.

It's not bad. It's got a good message, but it doesn't really go anywhere with it. It could have gone so much farther, and it didn't.

Everybody fits in somewhere. There's a place for you.