Not All Princesses Dress in Pink

Some princesses dress in pink, though. 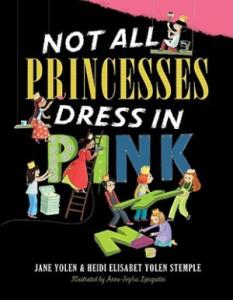 For a book that's clearly intended to show that not all princesses are the same, or girly, it sure seems obsessed with sparkly crowns. I wish there was at least one princess that didn't explicitly wear a sparkly crown in this book. The vast majority of them are highly athletic, which I guess is okay. Athleticism is not a very stereotypically female thing, but maybe some of them would be more interesting if they were shown as being useful to society instead of just acting in their own self-interest. Some explicit brains or intelligence would be awesome, too. Some of the rhymes seem forced, like "pink" rhymes with "stink."

The book is just a list of what princesses can do other than wearing pink. The first plays baseball. The second princess plays soccer. The third princess plays with dogs, I guess? She plays in the mud. The princess are in a wooden tree house, "Fixing things with power tools: saw, screwdriver, hammer, drill," which is funny because there actually aren't any power tools in the image, and hammers really don't make any sense as a "power tool" unless you count jackhammers. And that would be pretty awesome, if the artist had drawn a princess with a jackhammer. But she didn't. They're shown using a hand saw, pliers, and hammer, and there's no drill in sight. The tree house is pretty cool, though. Then five of the six multicultural princesses are shown eating (I'm not sure where the soccer player went). Three of them are shown gardening. One rides a bicycle. One of them pretends to fight some toys while wearing "chain mail". Then some unknown number of them play on a weird playground with an incredibly tall tower and a full-sized ladder going up it about halfway. There seem to be some princes in this scene (they have a different style of crown than the princesses) and then the final princess runs in some kind of race and the other five are waiting for her. There actually seem to be some additional princesses (the fighting princess either has different hair in the dark, or doesn't seem to be one of the main six). Then the princesses have a dance, and then one of them is shown going to bed at night. The last line of the book is, "and a very sparkly princess crown." "Very sparkly princess crown" is in the same swirly, cursive font as "sparkly princess crown" is throughout the book.

It seems like the only thing that makes these girls princesses is the sparkly crowns. Do they all live together in this house? It seems like it, because the first and third princesses are both attended by the same servant, who has a baseball glove in the first case, and an umbrella in the latter. He doesn't seem to work for the other princesses, though. It seems a little hung up on the princesses not wearing pink. Really, it's okay to dress in pink. If you like pink, go for it. Why is it important that they all be highly athletic and play outside and get dirty? Why isn't there at least one princess who does one stereotypically girly thing, and the others are okay with it? Because that's the problem with this extreme anti-princess attitude: some girls actually do like princesses. As long as it's in moderation, and tempered with understanding of what princesses are actually like, people should be okay with that. You don't have to be unfeminine to be a feminist. You can enjoy things that are traditionally associated with women or girls. That backlash makes it hard for people (of any gender) who are actually into those things to avoid rejection. And nobody's forcing children to like princesses. (And why is the bicycle-riding princess wearing metal body armor? That seems like a bad idea.)

But it's not a bad book; it's just incomplete. And I would think real princesses, like Princess Kate, don't wear sparkly crowns 24/7. Are these princesses supposed to be literal royalty, or is it metaphorical? I like the idea of this book, but I don't think it was that well executed. Which is disappointing, because I rather like Jane Yolen's writing, and this isn't a very good example of it. Maybe it's because she's not the only author.

You don't have to wear pink to be a princess. Or, princesses can't wear pink.