This is Not My Hat

Seriously, Mr. Klassen, what is it with the hats? 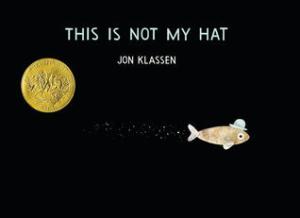 This is a weird book. It's told from the point of view of a fish who has just stolen a hat from a bigger fish and is on the run from the big fish. He keeps claiming that he is not afraid, but he keeps trying to hide so the big fish doesn't catch him. At the end, the big fish gets his hat back. It's not clear what happens to the little fish. Possibly he gets eaten. Violence is implied, but it's not explicit. Whatever happens, he gets his property back.

The artwork is pretty. The rhythm of the words is very catchy and interesting. I'm not too keen on the storyline and the message. The message is either: Don't steal things because you'll get eaten, or Don't worry about people stealing your stuff because you'll always get it back. On the other hand, it does literally say, "It's wrong to steal a hat," so maybe that's supposed to be the message. "I know it's wrong to steal a hat. I know it does not belong to me. But I am going to keep it. It was too small for him anyway. It fits me just right."

The main character is a jerk, and the main character gets karma. Maybe children like this kind of sociopathic protagonist and the ensuing comeuppance. It's not a bad book. I really don't know about this. Jon Klassen seems to be pretty popular, and this is one of at least two books he's written about animals who steal hats. Maybe hat stealing is a thing among children. Maybe there's some kind of massive hat-stealing epidemic that we need to be careful of. Maybe it's just kind of like the old Warner Brothers cartoons where people just act like jerks and get what's coming to them, for no apparent reason. There's nothing clever happening here. There's no reasoning, but maybe small children don't need that. I guess it works for him.

It's wrong to steal a hat.