Odd Books are In. 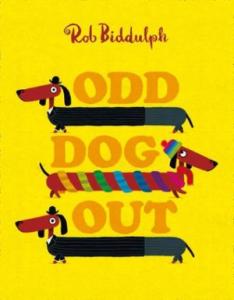 It's basically the same premise as "Mr. Tiger Goes Wild." It takes place in a town of dogs, where all the dogs are exactly alike. They all wear the same thing. All the swimmers wear the same outfits. All the dogs on the street wear suits. "They all blend in. No dog stands out." But there's one dog who doesn't look anything like them. She's got a colorful scarf on and headphones, and she's listening to music. She doesn't do things in the same way as everybody else, and she's really sad about it. So she leaves, and she goes searching all over the place and finally ends up at "Fabulous Doggywood" and finds that there are a massive number of other dogs who are dressed identically to her. They all ride bikes like she does.

But there's one dog that isn't like the rest of them (including her). He's got a newsboy cap on and a sweater. She goes up to him and says, 'I know it must be so sad for you being the only one like you,' and he's like, "I really feel like I belong. I love to stand out from the crowd! And so should you. Stand tall. Be proud." And she goes, 'Oh, obviously.' And she has a change of heart, and goes back home, because she wants to be the only one like her. And when she comes home, all the other dogs tell her how much they missed her and cheer and throw her in the air and say, "You've made us all appreciate that being different's really great!" And a few of them are dressing differently. The last page reads, "Be who you are."

Oh, come on. She learns to be different because somebody tells her to? So basically, she just goes through her entire life following instructions. She feels like she shouldn't be different because everybody else won't like it, until somebody else tells her it's okay to be different and then she's alright with it. (It doesn't help that she's female and there's no other obviously female dogs in the book.) She doesn't come to any conclusions by herself. And the other dogs who say, 'You made us really appreciate this': Why? What is good about being different? Why is it good to be who you are? There's no justification for her coming to this conclusion or the feeling that the other characters have. It's just silly.

The art's great. I'll give Biddulph that. It's really cute. And on the last page, you see that the newsie dog came to visit her, like she's made a friend (or possibly a lover, given the hearts--for Pete's sake, she just met the guy!).

The rhyming is also very well done. The message is good, it's just poorly communicated and dropped like an anvil out of the sky. It needs justification.

Be different, because we said so.